PartyPoker has announced a revision to its loyalty program, removing the highest VIP tier and cutting rakeback in an effort to attract recreational players. 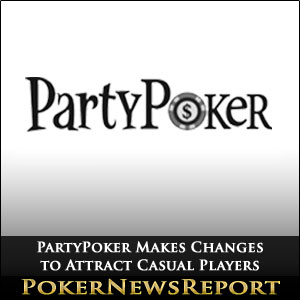 PartyPoker has announced a revision to its loyalty program, removing the highest VIP tier and cutting rakeback in an effort to attract recreational players.

Palladium Elite, the poker site’s top echelon reserved for experienced grinders, has been removed from the PartyPoker VIP program. In addition, all bonuses that exceed more than 30% rakeback will no longer be offered. The changes become effective on April 1, 2013.

We believe the change will allow us to manage our poker room more effectively and ultimately allow for fairer distribution of bonuses across the network, said a PartyPoker representative on TwoPlusTwo.

PartyPoker’s current loyalty scheme offers five different levels: Bronze, Silver, Gold, Palladium and Palladium Elite. The levels achieved are determined on a quarterly basis. Palladium Elite players had been able to earn in the neighborhood of 65% rakeback when using all promotions available.

PartyPoker’s parent company, Bwin.party, announced in August of last year that it was planning to make changes in favor of casual players. In an effort to optimise the poker ecology, those changes included removing high-stakes tables, protecting recreational players from sharks who target them, and focusing more on retaining casual players and establishing player pools that are not overloaded with professional grinders.

Those changes follow a trend in the online poker industry that is geared toward novice players. Online poker operators realize that if the high-volume grinders eventually chase away the recreational players, there will no longer be any depositing players. This could eventually destroy the industry. One of the more publicized moves to balance the field so to speak, was Bodog’s transition to anonymous tables, which prevented the poker-tracking grinders from targeting and preying on the fish.

PartyPoker’s Palladium Elite players have until March 31 to make use of any bonuses accrued. Players in that echelon are advised to take full advantage during that time, as the bonuses will not be honored come April 1.

PartyPoker enjoyed an influx of new players when Bwin Poker on the Ongame Network migrated to the PartyPoker platform in December. The site is now in third place for cash game player traffic. The cuts in rakeback in April will undoubtedly cause some pro grinders to leave and play at other online poker sites, while also attracting new players to deposit and play at PartyPoker.