PartyPoker have officially annoounced the launch of their new and exclusive poker variation – Double Hold’em. The Texas Hold’em game sees players dealt three hole cards instead of two, with players having to select a ‘point’ card… 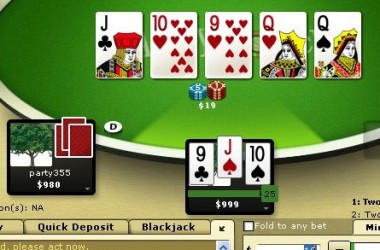 Online poker room [geolink href=”https://www.pokernewsreport.com/partypoker”]PartyPoker[/geolink] have been sat on a gem for almost a month but they have officially announced their new version of Texas Hold’em Poker, Double Hold’em.

The introduction of Double Hold’em at PartyPoker means that there is yet another online poker room who have dreamt up their own poker variant, with Full Tilt Poker bringing Rush Poker to the tables earlier this year.

Double Hold’em is played in the same basic way as the traditional form of the game but rather than being dealt two hole cards at the start of each game you are given three cards.

You are then to decide which of your three cards you are going to use as a point card, moving that card into the center of the remaining two cards within your hand.

The beauty of the game is that the cards that you are holding in your hand can be altered throughout the game, allowing you to switch between the three cards to ensure that the best card for you is set as the point card.

The game sounds complex and hard to understand but in reality, it couldn’t be easier and with E. Mark Gross and Zvi Lando from BrainTable behind its creation, you can be sure that the variant is going to be a huge hit.

The PartyPoker site told their official blog readers that the introduction of the game means that players are given more – more playable hands, more action, and bigger pots, claiming that the game was built by poker fans for poker fans.

Gross and Lando say that they are pleased to have finally created their variant after starting on the concept back in 2006 but having to work through a number of play techniques and other strategic methods to define the best concept for the game.

The new variant is exclusively available at PartyPoker but Gross and Lando have revealed that they have also developed a video poker version of the variant, which carries two forms of play. This version of the game is not available anywhere else but on the BrainTable website.

Double Hold’em has been tipped to become a huge success with the members at the online poker room, and with PartyPoker sitting on the third place within the cash game traffic tables, you can be sure that you will find the action you want.