Bwin.party has announced that all systems are go for its launch in New Jersey later this year and expects a rosy future in a newly-regulated U.S. market. 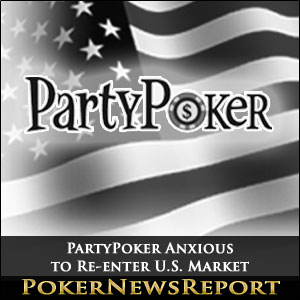 Bwin.party has announced that all systems are go for its launch in New Jersey later this year and expects a rosy future in a newly-regulated U.S. market.

As many will recall, PartyPoker ruled the roost of the online poker industry in the early to mid-2000s. The site enjoyed more player traffic than any other online poker room until voluntarily leaving the U.S. marketplace following the passage of the UIGEA in 2006.

That decision to comply with the new statute created a complete upheaval in the industry, as PokerStars elected to remain in the U.S. and grabbed more than 50% of the worldwide market share as a result. Seven years later, PartyPoker currently sits in 5th place globally and, in hindsight, may wish they had never left.

PokerStars has been accused by many of obtaining its market edge illegally, with the American Gaming Association going so far as stating that the site’s business practices have employed tactics of “deceit and chicanery.” Due to this alleged flouting of the law, bad actor language has found its way into U.S. online gambling legislation at both the state and federal levels, except in New Jersey, where PokerStars is hoping to push its way in via a partnership with the Resorts casino.

In any event, PartyPoker is looking forward to once again servicing the American market and anticipates revenue to rise as a result. New poker software is currently being tested with a roll out expected in August. In the same month, new payment processing services will also be launched that should greatly benefit mobile customers.

Many online poker players fondly remember the industry’s heyday in the early 2000s when PartyPoker was the most popular site by a wide margin. Although those days are long gone, PartyPoker looks to be readying itself for a re-entry into the U.S. market with its nearly-impeccable image intact.