Party Poker´s highly anticipated software upgrade will take place on Saturday 24th February, after which the site will be revising its Power Series and launching a new MILLIONS Online leaderboard promotion with $120,000 in prizes every week throughout March. 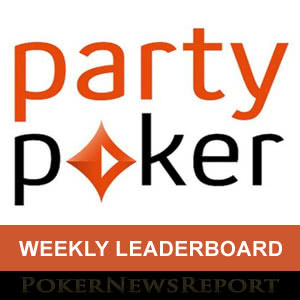 Party Poker´s highly anticipated software upgrade will take place on Saturday 24th February, after which the site will be revising its Power Series and launching a new MILLIONS Online leaderboard promotion with $120,000 in prizes every week throughout March.

It is not unheard of for Party Poker to tweak its software in order to improve the player experience. Just before Christmas the site made several upgrades to its tournament lobby and introduced a “currency switcher” function so players with accounts in Sterling and Euros could see the dollar value of their balances.

The upgrade scheduled for Saturday 24th February is expected to be far more noticeable. Key improvements announced so far include the re-introduction of oval tables, a new time-bank indicator, and a better system of taking player notes to assist players who are multitabling. There will also be several small enhancements to improve the look and feel of the tables.

The current Power Series tournament schedule consists of nearly five hundred tournaments over a range of buy-ins – in total guaranteeing more than $2 million in prize money each week. From Monday 5th March, the schedule will be revised to offer increased guarantees, an improved selection of game formats and – based on player feedback – optimised structures.

At the same time, Party Poker will be launching the MILLIONS Online leaderboard promotion that was [geolink href=”https://www.pokernewsreport.com/party-poker-raises-the-bar-with-20-million-gtd-millions-22063″]announced in December[/geolink]. This weekly promotion gives players the opportunity to qualify for Party Poker´s $20 million guaranteed event next December – either directly if they finish in the top ten places in the High leaderboard competition, or via thousands of satellite tickets that will be up for grabs.

According to the information posted on Party Poker´s blog, the distribution of the prizes will favour the site´s High Rollers. While the top players on the High leaderboard will be awarded Millions Online seats worth $5,300, players who finish at the top of the Low and Mid leaderboards will collect Millions Online satellite tickets with a value of $22.00, $109.00 and $530.00.

Undoubtedly the size of the ultimate prize will encourage players to compete in qualifying leaderboard events in order to have the opportunity to win a life-changing amount. This in turn will increase the number of entries for each Power Series tournament, helping each event reach its guarantee – hopefully prompting Party Poker to further enhance the value of the tournaments.

Commenting on the changes due to happen over the next four week, Party Poker ambassador Patrick Leonard said:

Almost every tournament schedule I’ve seen over the last 10 years of playing poker has outdated structures and tournaments that shouldn’t be there but are just because “they’ve always been there”. Removing every tournament on the site and building a logical and balanced schedule based on feedback from the regular players that also makes it different and exciting for amateur players every hour and every day is fantastic. Combining this with huge leaderboards and modern software makes me very excited about logging onto Party Poker on March 5th and playing the whole schedule.

Different and Exciting Times Ahead at Party Poker

There are definitely going to be different and exciting times ahead at Party Poker. Not only will you enjoy a better player experience from the end of this month but, starting in March, you will also have the opportunity to win a share of $20 million by the end of the year. Don´t forget that, during March, the MILLIONS Online leaderboard promotion will be paying out $120,000 in prizes each week. From April, the value of the weekly prizes is expected to be $60,000.

Therefore, it may be in your best interests to visit Party Poker sooner rather than later. If you are not yet playing at Party Poker, you are invited to first read our [geolink href=”https://www.pokernewsreport.com/partypoker”]Party Poker review[/geolink], which lifts the lid off the “world´s most rock solid poker room” to reveal what lies beyond the headline promotions and first deposit bonus. There are more opportunities to enjoy a potentially lucrative online experience than you may think and they are only going to get better over the year ahead.