Party Poker has announced it will increase the guarantee for its feature Title Fight tournament each time the previous week´s guarantee is beaten. 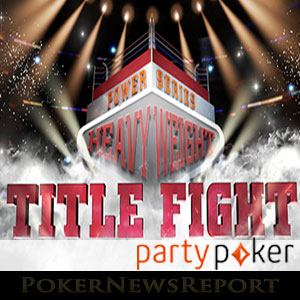 Party Poker has announced it will increase the guarantee for its feature Title Fight tournament each time the previous week´s guarantee is beaten.

Party Poker´s title fight tournament regularly attracts around 1,500 entries due not only to its guaranteed prize pool but because of its attractive structure. Players start with a generous 30,000 chip stack to negotiate 15-minute levels with blinds starting at 75/150 (ante 25).

Late registration is open for four hours – at the end of which the blinds are 1,200/2,400 (ante 400). Two re-entries per player are allowed during the late registration period, after which the Title Fight event continues in a freezeout format. The tournament typically lasts ten to twelve hours, after which one lucky player will walk away with a first prize in excess of $60,000 unless a deal is made at the final table.

What Happened in Last Night´s Event?

How High Will the Guarantee Go?

In the blog post announcing the new guarantee structure, it was suggested that the guaranteed prize pool for the Title Fight event could reach $500,000 – or even $1 million. Although the latter figure seems incredibly optimistic, nowhere in the blog post was it suggested that the guarantee would be reduced if it were not met. This would imply that, over a period of time, a $500,000 prize pool is realistic.

Could the Increasing Guarantees Result in Overlays?

Absolutely. If, for example, the guarantee was to increase for each of the next four weeks, each tournament would start with a prize pool of $400,000. It is not inconceivable that when a major online tournament series – such as PokerStars´ SCOOP takes place – the number of players taking part in Party Poker´s feature tournament could fall back to its current levels – resulting in a $100,000 overlay.

There is also likely to be fewer players around to take part in the Title Fight event when Party Poker heads to Nottingham for the climax of the [geolink href=”https://www.pokernewsreport.com/party-poker-adds-another-million-to-millions-guarantee-20982″]Party Poker MILLIONS[/geolink] in April. Many of the players who cashed in high positions in last night´s Title Fight event have already booked their seats in Day 1 of the live event, and many more are expected to qualify or buy-in directly over the next two months.

The potential for massive overlays is an excellent reason to start playing at Party Poker. And here is another. If you register an account after following our links, and fund your account using the [geolink href=”https://www.pokernewsreport.com/party-poker-bonus-code”]Party Poker bonus code[/geolink] “[bonuscode room=”partypoker”]”, you will be entitled to a 100% first deposit bonus up to $500. This bonus offer is not directly available through the site, and would give you sufficient free poker money to buy into two Title Fight events!