Party Poker has released a new Power Series tournament schedule, packed full of the site´s most popular tournaments and based around a daily theme. The schedule has buy-ins starting at $1.10, is supported by the site´s comprehensive satellite structure, and guarantees a minimum of $10 million each week in prize money. 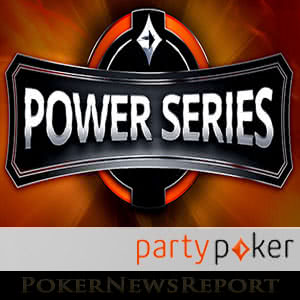 Party Poker has released a new Power Series tournament schedule, packed full of the site´s most popular tournaments and based around a daily theme. The schedule has buy-ins starting at $1.10, is supported by the site´s comprehensive satellite structure, and guarantees a minimum of $10 million each week in prize money.

Unlike suggested by the name, the “Power Series” isn´t actually a “series” – as is the “PowerFest Series” or the current “KO Series” – it is the name being given to feature events in Party Poker´s regular weekly tournament schedule. It is also unusual that, if you click on the Power Series tab in the tournament lobby, you will find plenty of Power Series events not advertised as such on the Party Poker website.

These inconsistencies apart, the new Power Series tournament schedule has something for everyone. Party Poker has had a good look at the type of tournaments players enjoy and packaged them into a great-looking schedule with enhanced guarantees. Furthermore, the site is continuing with its popular – and often undersubscribed – satellite structure starting at Centroll level.

A Different Theme Every Day (Almost)

The new Power Series tournament schedule is loosely based around daily themes. For example, Monday´s Power Series events consist of mostly Progressive Knock Out tournaments, Tuesday´s “Big” schedule is packed full of events with healthy guaranteed prize pools up to $200,000, and Wednesday´s schedule is dominated by 6-Max events. The full line up looks like this:

As well as the feature Power Series events, there is plenty more action running throughout the day. In between the two-hour start times, Party Poker is hosting “Bounty Hunter” Progressive Knock Out tournaments, 6-Max Turbo PL Omaha tournaments, and full-ring PL Omaha Hi-Lo tournaments (the non-advertised tournaments that can be found under the Power Up tab mentioned above).

Qualify into the Top Events from Centroll Level

Party Poker´s satellite structure gives players the opportunity to go from practically zero to hero via two steps programs – both starting at Centroll level – i.e. the buy-in is just $0.01. Each Centroll sub-satellite awards a minimum of fifty $1.10 tickets as prizes that can be used to follow one of the following paths:

The two paths can be joined at any stage, or left at any stage. For example, if you wanted to play in a tournament with a $109.00 buy-in, you could play in a $22.00 buy-in satellite and – assuming you qualify – use your ticket to play in the target event rather than continue along the qualification path. Please note however, during special tournament series (like the recent [geolink href=”https://www.pokernewsreport.com/pko-tournament-series-coming-to-party-poker-on-sunday-22202″]KO Series[/geolink]) some of the qualifiers are for specific tournaments that you must play in if you finish in a prize position.

Inasmuch as the new tournament schedule lacks much in the way of innovation, it certainly provides plenty of opportunities for additional value due to events failing to meet their guarantees – especially in the qualifiers. It can often be a good idea to check out which satellites are soon to start, what their minimum requirement is to run, and how long is allowed for late registration.

If you would like to take advantage of the value in Party Poker´s tournament schedule – and you do not yet have an account with the site – be sure to read our [geolink href=”https://www.pokernewsreport.com/partypoker”]Party Poker review[/geolink]. Our review explains what you can expect when you start playing at the site, highlights some of the permanent promotions, and provides information about how you could benefit from a 100% first deposit bonus up to $500.