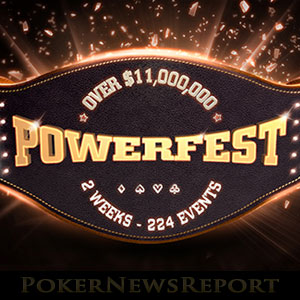 The end of January is going to see a packed schedule for online poker players. PokerStars´ TCOOP and 888 Poker´s XL Series start on 18th and 19th January respectively and, as both these series reach their first weekend, Party Poker´s latest PowerFest series gets underway.

All three events have a wide range of tournaments and buy-ins, but if you looking to compete in just one of the tournament series, Party Poker may be the best. The PowerFest Series has nearly twice as many tournaments in its schedule as the other two series combined, plus the site is giving away $225,000 in [geolink href=”https://www.pokernewsreport.com/party-poker-adds-another-million-to-millions-guarantee-20982″]Party Poker Millions[/geolink] tickets over three leaderboard competitions.

The Biggest PowerFest Yet

Last September, Party Poker hosted the (at the time) “[geolink href=”https://www.pokernewsreport.com/party-poker-announces-biggest-powerfest-in-history-20866″]Biggest PowerFest in History[/geolink]”, offering more than $10 million in guaranteed prize pools. Now the site has raised the bar again with an additional 26 events and a further $1 million in prize money. Like before, the categories of tournaments are broken down into four buy-in levels but, in a change to the format of the September series, the first week of PowerFest IV will see all four categories run simultaneously:

Each category will have its own Main Event. The Featherweights and Middleweights battle it out for $40,000 and $100,000 respectively on Sunday 29th January. Party Poker is expecting a big turnout for the Heavyweight Main Event on Sunday 5th February and has guaranteed that Main Event for $500,000. The High Rollers have two $1 million guaranteed events at the conclusion of their schedule – a $1,000 buy-in Main Event and a $5,000 buy-in Super High Rollers event.

The Party Poker Millions is a $6 million guaranteed poker tournament that will climax at the Dusk till Dawn poker club in April. In the run up to the event, Party Poker is hosting “phased” tournaments to qualify as many players as possible for online Day 1s on 9th and 16th April, or live Day 1s at Dusk till Dawn on 18th and 19th April.

Already 64 players have qualified for the $5,300 buy-in event, but only 15 with stacks in excess of 1 million chips. The size of the chip stacks is significant because players now winning seats directly into Day 1 of the Party Poker Millions will start with 1 million chips and have an advantage over the 49 players who have qualified with smaller stacks. With a guaranteed first prize of $1 million, any advantage is worth taking notice of.

For this reason, we recommend that [geolink href=”https://www.pokernewsreport.com/partypoker”]Party Poker[/geolink] should be your destination of choice if you are considering playing in just one of the three big tournament series taking place at the end of January. Throughout the PowerFest series Party Poker will be giving away seats in both the Party Poker Day 1 and the phased tournaments via three leaderboard competitions – with players of all bankrolls having the opportunity to play in the final of the event at Dusk till Dawn in April.

For more details of the PowerFest series and the leaderboard competitions, visit Party Poker today.