Party Poker Puts its Monster Series on a Diet

Party Poker has announced the schedule and supporting promotions for its next Monster Series running from Sunday 29th July to Sunday 6th August. Although the guaranteed prize pools are generally lower than previous incarnations, the packed schedule should offer something for everyone. 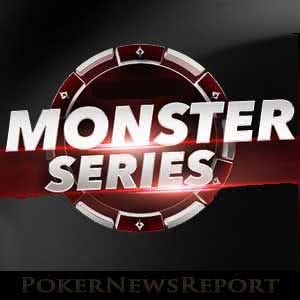 Party Poker has announced the schedule and supporting promotions for its next Monster Series running from Sunday 29th July to Sunday 6th August. Although the guaranteed prize pools are generally lower than previous incarnations, the packed schedule should offer something for everyone.

Not surprisingly for a summer tournament series – and considering the last Monster Series was littered with overlays – Party Poker has scaled backed the guarantees for its July/August Monster Series from $2.7 million to $2.1 million, despite increasing the number of tournaments in the schedule by almost 40%.

Over the eight days of action, there will be a total of 171 Monster tournaments (up from 123) due to the inclusion of PLO events at 8:30pm (all times CET) each evening and hyper-turbo NL Hold´em events scheduled for 1:00am each morning. As usual, the schedule also includes three Ladies-exclusive tournaments which will be played simultaneously at 7:30pm on Saturday 5th August.

Other than the addition of PLO and hyper-turbo tournaments (and the reduced guarantees) there is little to distinguish the July/August Monster Series from the corresponding series that took place at the end of April. Rounds of three tournaments will start at two-hourly intervals from 3:00pm each day (plus the 8:30pm PLO events), with the speed at which event is played increasing throughout the day.

Plenty of Variety and a $200K Championship Event

Most players will be happy with the schedule for the Monster Series. It is not as “PKO-heavy” as the last series and includes plenty of “regular”, “deepstack” and “smooth” events. Each round of three tournaments has a micro, mid and high buy-in (for example, Event #1 has buy-ins of $1.50, $5.50 and $22.00) and players can choose to play in one, two or three events simultaneously.

The Championship Event takes place on Sunday 6th August at 7:00pm. It has a prize pool guarantee of $200,000 – four times the normal guarantee for a $33.00 buy-in Sunday Major – and follows the same format as a Sunday Major tournament. Players start with 100,000 chips, blinds of 500/1,000 and a 125 chip ante. Late registration is open for twelve 12-minute levels, during which time players can re-enter if they are knocked out, and – by the end of which – the starting stack will be worth twenty Big Blinds.

At the same time, micro buy-in ($3.30) and mid buy-in ($11.00) versions of the Monster Championship Event will be getting under way. These will have the same format as the Championship Event with the exception of levels lasting 10 minutes each, and carry double the normal guarantee for the respective Sunday Major tournaments ($5,000 and $10,000).

During Monster Series Week, Party Poker will be running three promotions to support the series – a cash game happy hour, a social media prize giveaway, and a free prize draw.

What we like about Party Poker´s Monster Series – and the promotions that support it – is that it gives players with limited bankrolls the chance to participate in a tournament series and potentially win the sort of money that could enable them to get involved in more valuable series later in the year.

If this opportunity appeals to you, and you are not yet playing at Party Poker, read our review to see how you could benefit from a first deposit bonus of up to $500 when you create an account using the Party Poker bonus code [bonuscode room=”partypoker”][/bonuscode].