Party Poker has launched another promotion based around its ambassadors – this time giving players the chance to play Sit & Go Hero for up to $1 million. 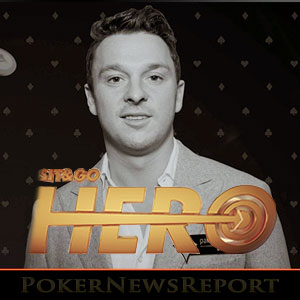 Party Poker has launched another promotion based around its ambassadors – this time giving players the chance to play Sit & Go Hero for up to $1 million.

2016 has been a busy year for Party Poker´s ambassadors. First of all there was Carl Froch and the rebranding of the PokerFest series to the [geolink href=”https://www.pokernewsreport.com/party-pokers-powerfest-series-starts-this-sunday-20474″]PowerFest series[/geolink]. Then there was Boris Becker and the [geolink href=”https://www.pokernewsreport.com/beat-the-ace-at-party-poker-and-win-up-to-25000-21059″]“Beat the Ace” promotion[/geolink]. Now there is Sam Trickett and the $1 Million “Trickett´s Hero” promotion.

How the Trickett´s Hero Promotion Works

“Trickett´s Hero” is a high buy-in ($100) version of Party Poker´s Sit & Go Hero game – a four-handed, hyper-turbo game that awards a random prize and assigns one player as a bounty before each game begins. Typically – in a “standard” game of Sit & Go Hero – the prize money is divided 75% to the winner of the game and 25% to the player who knockouts out the bounty.

When higher prize multipliers are drawn (50x the buy-in or higher), the second and third placed players also share in the prize pool; and – when the Jackpot 10,000x multiplier is drawn – all four players win a cash prize. In “Trickett´s Hero” the format is the same with the exception that the Jackpot prize is 12,500x the buy-in – enabling the winner of the game to walk away with a cool $1,000,000 and possibly an extra $100,000 for knocking out the bounty. The three other players will each receive $50,000.

One further difference between the “standard” Sit & Go Hero game and “Trickett´s Hero” is that the frequency of the 6x and 10x multipliers have been increased (at the expense of the 4x multiplier and higher prize multipliers) to make the promotion more appealing to players willing to put the $100 buy-in on the line. Speaking about the promotion, Party Poker´s latest ambassador said:

Players can become a millionaire on Party Poker with my new Trickett’s Hero. For just $100, Trickett’s Hero gives players the opportunity to win up to $1.1 million in minutes. Look out for me at the table and if you are lucky enough to claim my bounty during December or January I will personally double your prize winnings.

The second of the Sit & Go Hero variants to be launched this week is Power Series Hero – a three-handed version of the game that has also had the bounty element removed in order to accommodate a higher level of prizes. The Power Series Hero game costs just $10.00 to enter, and awards random prizes of tournament entry tickets to Power Series events.

Your Chance to Play in the Party Poker Millions for Just $10.00

Similarly, the Millions Hero promotion is a three-handed, hyper-turbo game with the bounty element removed. Also costing $10.00 to enter, players can win tournament entry tickets ranging from $22.00 in value to $6,750 in value – the top prize being a direct buy-in to Day 1 of the $6 million guaranteed [geolink href=”https://www.pokernewsreport.com/party-poker-adds-another-million-to-millions-guarantee-20982″]Party Poker Millions[/geolink] at Dusk till Dawn in April.

Prizes with a value of $675.00 can be used to buy into any of the Phase 1 online satellites, while prizes with a value of $109.00 or less can be used to qualify for the Phase 1 online satellites. Naturally, the frequency of hitting one of the top two prizes is less than in the Power Series Hero promotion, but the opportunity to win a life-changing amount if you do is far greater.

Will You be a Hero at Party Poker?

Whether you fancy taking on Sam Trickett for the opportunity to win $1 million, or testing your three-handed skills to win a Power Series ticket or Millions entry, there is plenty going on at Party Poker right now. Make sure you do not miss out on the opportunity to be a hero at [geolink href=”https://www.pokernewsreport.com/partypoker”]Party Poker[/geolink] by visiting the site today.