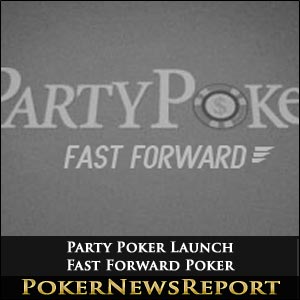 Aware that they were losing business to PokerStars´ Zoom Poker and the Speed Poker games on the iPoker network – and with Rush Poker likely to be available again within three months – [geolink href=”https://www.pokernewsreport.com/partypoker”]Party Poker[/geolink] have pretty much had their hand forced into producing a competitive fast-fold alternative and have today released a beta version of “Fast Forward”.

“Fast Forward”, which is currently only available for play money games, is played in 6-Max NLHE format with stakes of 5/10. When the game goes live for real money – forecast to be within 1-2 weeks – Party Poker intends to provide NLHE tables at $0.01/$0.02 and $0.05/$0.10, with other limits being introduced subject to demand, and also a Pot Limit Omaha variant of the game.

The version currently being tested allows players to “Forward Fold” once their cards have been dealt to them (or “Forward Fold to any bet” if in the blinds) and move onto another table if they wish. The option exists to stay at the same table once a player has folded their cards and “Watch on Fold” to see how the hand plays out, with a “Next Hand” button available when using the “Watch on Fold” facility to get straight on with the next hand if the post-flop action becomes too painful.

One of the painful things we discovered about the current version of Fast Forward was that it appeared remarkably slow if you are used to playing other fast-fold games. Possibly this was because the play-money players who were participating in the game had no previous experience of playing fast poker (to be fair, we don´t spend a lot of time on the play money tables at Party Poker) but, with the “Watch on Hold” facility, we had plenty of time to make notes about other players at the table had we wanted to.

It was interesting to see our stats compared to other fast-fold games we have played (both for real and play money). We didn´t seem to get dealt into in as many hands as we would normally and a slight delay between changing tables could possibly explain that – although the cards are dealt much quicker than (say) Zoom Poker and Party Poker uses the same horizontal “slide” animations as PokerStars (who also offer the choices of “fade” and “flip”).

In the race to produce a high-speed cash game poker variant, Party Poker have not been the quickest; but with the release of Fast Forward they have managed to produce a fairly decent product. Admittedly it is in beta testing – so expect a better final offering than is currently available – however, whether “Fast Forward” is good enough to arrest a year-on-year 44% decline in traffic to the site remains to be seen.

Our Opinion: Watch to see if Party Poker offer any special promotions when Fast Forward poker comes out of beta testing. With the proposed stake levels, the introduction of Fast Forward is barely going to help anybody chasing Party VIP Points for Palladium awards but, with the general level of fishy players on Party Poker who will be attracted to Fast Forward because of its novelty value, the real money launch may be lucrative for some 6-Max micro and low stakes grinders.