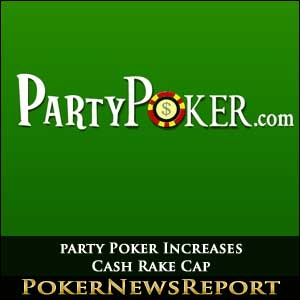 Party Poker has made a number of significant changes to the way in which rake is deducted from cash games on its site.

The changes, which are being introduced tomorrow – August 24th – will have a significant effect on players´ ability to redeem their Party Poker bonus and take advantage of the Palladium Rewards program but, more importantly, will result in a bigger deduction from the pot for mid-high stakes players.

The first change will see [geolink href=”https://www.pokernewsreport.com/partypoker”]Party Poker[/geolink] awarding Party Points for the rake a player contributes to the pot, rather than dividing the rake equally between players seated at the table irrespective of whether they were involved in the hand or not (“dealt rake”). This move will reward more active players, and may act as a disincentive for tight “nitty” players from multitabling half a dozen tables and never getting involved in the action.

Players will still be awarded Party Points at the rate of 2 per $1.00 raked from a cash game or paid in tournament entry fees, only now the award will be on how much an individual personally contributes.

Under the old scheme if there were 10 players seated around a table and $1.00 rake was taken from the pot, each player would be credited with 0.2 Party Points.

With contributed rake, if two players on the above table were solely responsible for generating the pot (and the $1.00 rake deduction) each would now be awarded 1 Party Point with the remaining players receiving nothing.

How Party Poker´s Rake Cap Compares With Other Poker Sites

At a time when most of Party Poker´s competitors are trying their hardest to attract poker players left orphaned by Full Tilt Poker´s demise, we find it extraordinary that they would penalise good mid-stakes players in this way while at the same time changing their rake structure to reward loose players. Maybe Party Poker believe that by encouraging more fish onto their site, they will also attract more sharks. That´s not going to happen while they still offer one of the lowest [geolink href=”https://www.pokernewsreport.com/best-poker-bonuses”]poker bonuses[/geolink] in the industry.