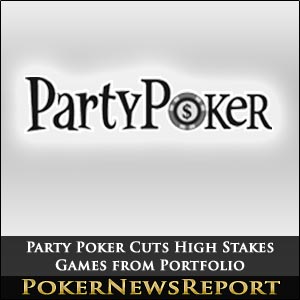 According to a company statement, the change was made to improve the “poker ecology” of the site and was in the best interests of players playing on Party Poker. Party Poker added that they believed the move will improve the action at the [lower stake] tables.

Reaction to the withdrawal of high stakes games was mixed – with several Party Poker regulars saying that it was a wise business decision, while others noted that the high stakes players will simply move to another site and Party Poker will lose further revenue.

Party Poker has seen a significant decline in traffic over the past twelve months and even though the poker site´s amalgamation with Bwin Poker later this year is expected to generate a 20 percent larger player pool, the number of players on the site will still be significantly lower than the beginning of the year.

Proposals to reverse the downward volume of traffic were announced in March with the development of Party Poker´s own “fast-fold” poker variant announced along with the company´s intention to enter into social gaming and mobile apps. The poker site also hopes to be able to launch its online poker room in Nevada early in 2013 as a fore-runner to huge expansion in the USA.