Party Poker has announced that its September PowerFest tournament series will have more than $10 million in guaranteed prize pools over 198 events. 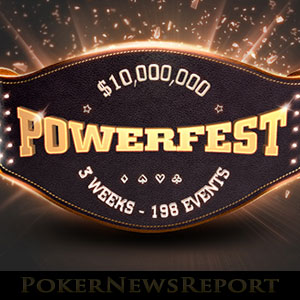 Party Poker has announced that its September PowerFest tournament series will have more than $10 million in guaranteed prize pools over 198 events.

The “Biggest PowerFest in History”, might only be the third PowerFest in history since Party Poker rebranded its trademark tournament series from “PokerFest” earlier this year, but it certainly has expanded in size and value.

When the initial PowerFest series was played back in February, it had 98 tournaments carrying a combined guarantee of $5 million. PowerFest II in May saw the guaranteed prize pools increase to $7.8 million – including a $1 million guaranteed High Rollers Main Event.

Now the third incarnation of the series promises to bigger still – with more than $10 million up for grabs between September 4th and September 25th including two $1 million guaranteed Main Events on the final day of the series.

The second $1 million guaranteed event in the PowerFest series also takes place on Sunday 25th September at 7:00pm. The High Rollers “Super High Rollers” tournament has a buy-in of $5,200 and will be going head-to-head with the PokerStars WCOOP High Roller Main Event and 888Poker´s Super XL Main Event, so it will be interesting to see which, if any, of the feature tournaments has an overlay.

Prior to the PowerFest series getting underway, Party Poker is hosting a “Mini PowerFest Series” from 1st to 4th September. The twelve-event series has buy-ins from $0.55 to $2.20 and combined guaranteed prize pools of more than $40,000. Although it will be a nice bonus to build your bankroll just before the main series gets underway, there is a potentially better reason for playing in the events – the Mini Series Leaderboard Competition.

The PowerFest Mini Series Leaderboard Competition has an incredible $20,000 worth of tournament tickets up for grabs for the top five hundred players on the leaderboard. Prizes start at 2x $5.50 tickets, and players who get into the top ten positions can expect to win multiple tournament tickets ranging in value from $5.50 to $109.00. The first prize is really worth aiming for.

The winner of the PowerFest Mini Series Leaderboard Competition will win a $215 ticket, ten $109 tickets, a $55 ticket, twenty-five $22 tickets, an $11.00 ticket and fifteen $5.50 tickets. The total prize value of the package is worth more than $2,000 – more than a player would collect for winning any of the Mini PowerFest events and likely to lead to some substantial cashes in the following weeks.

In addition to the Mini Series Leaderboard Competition, players can win cash prizes in a PowerPlus leaderboard competition (from August 28th) take part in the $500,000 Online Gran Prix (up to September 5th), qualify for the WPT500 and WPT UK at Dusk till Dawn (October 24th to November 6th) or book their seats to the Party Poker [geolink href=”https://www.pokernewsreport.com/party-poker-making-cpp-qualifiers-more-accessible-20803″]Caribbean Poker Party[/geolink] (November 19th to 26th).

There is so much going on at Party Poker over the coming months, it would be madness to miss out on it. New players would also be mad not to take advantage of our exclusive $500 Welcome Bonus – an offer not directly available from Party Poker. Details of our exclusive bonus, how to clear it and other benefits of playing at the site can be found on our [geolink href=”https://www.pokernewsreport.com/party-poker-bonus-code”]Party Poker bonus code[/geolink] page.