Party Poker has announced that the guarantee of the site´s Sunday Major will be increased from $200K to $500K for a one-off special event on Sunday May 11th. 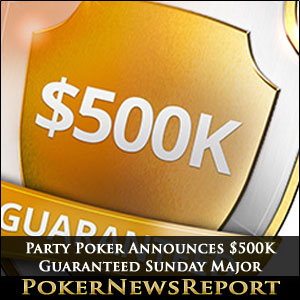 Party Poker has announced that the guarantee of the site´s Sunday Major will be increased from $200K to $500K for a one-off special event on Sunday May 11th.

PartyPoker.com has responded to players´ requests for tournaments with bigger prize pools by announcing it will host its Sunday Major on May 11th with a guaranteed prize pool of $500,000 – the most valuable tournament to be played at Party Poker in more than a year.

The tournament – for which the cards will be in the air at 2:00pm (ET) – has a $200.00 buy-in, late registration for three hours (nine levels), and a host of satellites available for players with a limited bankroll including a 100 seat guaranteed Mega-Satellite on the day of the tournament at 10:30am (ET)  with a buy-in of just $5.00.

Bonuses for Players who Buy-in Directly

Players who can afford to buy-in directly will have a special bonus of $500.00 available to them if they cash in the event. In addition to whatever cash they achieve (the first prize in the event is guaranteed to be $100,000) an extra $500.00 will be added to their available bonuses on the day following the special Sunday Major.

The bonus has to be cleared before it can be cashed out, and will be released at a rate of $50.00 for each 250 Party Poker Points earned. Party Poker Points are awarded at a rate of 2 per $1.00 contributed to the rake at cash game tables or paid in tournament entry fees, and players will have 30 days in which to clear their Sunday Majors bonus before the offer expires.

Satellites Everywhere – Plus a Special Offer for New Players

In addition to the 100 seat guaranteed Mega-Satellite on Sunday May 11th, [geolink href=”https://www.pokernewsreport.com/partypoker”]Party Poker[/geolink] are offering players a three-stage tournament “Steps” route to the $500K guaranteed Sunday Major:

The route starts at freeroll level, with the top four players in each hourly freeroll winning a $1.00 tournament entry ticket which can be used to enter any of the five-times-a-day “$500K Guaranteed Sub Qualifier Turbo” tournaments.

Winners in the Sub Qualifier tournaments progress to the six-times-a-day $10.00 buy-in qualifier, which guarantees one seat for the target event, plus additional seats for each $200.00 in the prize pool (above the original prize).

Players can jump into the “Steps” route at any stage of the qualifying process, but new players registering an account with partypoker.com will automatically receive five tickets into the $1.00 buy-in “Sub Qualifier” to help them achieve a seat at the $500.000 guaranteed Sunday Major a little easier.

Commenting on the announcement of the special Sunday Major, Team PartyPoker´s Mike Sexton said it was great to see a $500,000 guaranteed event on partypoker.com. He applauded the wide range of qualifiers for players with limited bankrolls, the special offer of free satellite seats for new players and the bonus for those buying-in directly.

He said he liked the way Party Poker was doing things differently and taking a punt with the bigger guarantee.