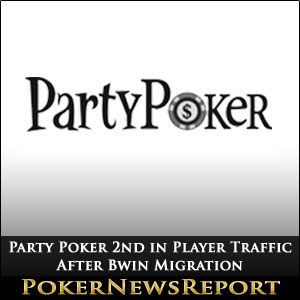 Previously mired in fourth place since the relaunch of Full Tilt on Nov. 6, Party Poker experienced a 45% increase in traffic over yesterday’s numbers, allowing the poker room to jump over both the iPoker Network and Full Tilt into the no. 2 position. Time will tell if Party Poker can lay claim to the second place ranking over the long term, but the prospects look good considering the dwindling cash game traffic at Full Tilt.

Upon relaunching last month, Full Tilt catapulted into second place right behind sister site PokerStars and in the same position, it held prior to Black Friday and the ensuing aftermath. However, in the last four weeks, double-digit percentage declines in cash game traffic have seen player numbers plummet 56% at Full Tilt since peaking soon after re-opening its virtual doors.

The transition of Bwin players to the Party Poker platform had been announced long ago and was slated to occur before year’s end. On Monday, the Bwin Poker website informed players that the site would be down for a short period while the migration took place. That transition is now complete and a new message on the Bwin website announces that We’re Back! Bigger and Better! with improvements on the Party Poker site that include a larger base of players and better selections in tournament action.

Over at the Ongame Network, Bwin’s departure has caused player traffic numbers to dwindle. Ongame is currently ranked 10th worldwide but may fall out of the top ten after losing Bwin.

Party Poker held down the number one position in player traffic for quite some time prior to the enactment of the Unlawful Internet Gambling Enforcement Act (UIGEA) in 2006. But the poker room left the U.S. market voluntarily and subsequently lost its top ranking to PokerStars six years ago. PokerStars has about a 6 to 1 ratio of cash game players over its nearest competitor, which is now Party Poker.

[isGeoAllowed]For players who have yet to try Party Poker, the site is offering a 100% deposit bonus up to $500 by using our [geolink href=”https://www.pokernewsreport.com/party-poker-bonus-code”]Party bonus code[/geolink]. It’s time to join the party at Party Poker![/isGeoAllowed]