Party Poker has released details of five promotions to support the next Monster Series, three of which reward players with MILLIONS Online satellite tickets.

Party Poker has released details of five promotions to support the next Monster Series, three of which reward players with MILLIONS Online satellite tickets.

If you have been toying with the idea of trying to qualify for Party Poker’s $20 million guaranteed MILLIONS Online event, but you don’t have the bankroll to support the higher buy-ins satellites, you could well be interested in the recently-announced promotions that will support the site´s Monster Series at the end of the month.

Three of the five promotions have MILLIONS Online satellite tickets as prizes and, if you enjoy a good slice of luck during the series, you could even walk away with a $5,300 seat in the target event for free. The best thing about these promotions is that you do not have to do anything special to be eligible for the prizes – just opt into the promotions and play in Monster Series events.

Party Poker´s Monster Series is a tournament series consisting of 57 events spread over eight days between Sunday 28th October and Sunday 4th November. With the exception of the Monster Series Championship tournament, each event has three buy-in levels (micro, low, and mid) which start simultaneously and follow the same format – making it possible to play 169 events in total.

The Championship tournament is naturally the most valuable of the series. Taking place on the final day of the series at 4:00pm GMT (please note clocks go back the weekend prior), it has a buy-in of $55.00 and a guaranteed prize pool of $300,000. The tournament will have an 8-Max format with seven minute levels, and only one re-entry per player will be allowed during the late registration period.

Party Poker has announced the following promotions well in advance in order to give players the opportunity to plan their Monster Week action. None of the promotions are live yet, but watch out for the Monster Series Sit & Go Jackpot games appearing in the poker client soon, as these represent an excellent way to win seats in Monster Series events for only $0.50. 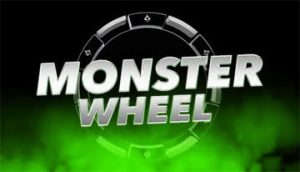 The Monster Wheel is the easiest way to win a prize during the Series because all you have to do to be eligible for a spin of the Monster Wheel is play in ten or more tournaments. Each spin of the wheel guarantees a cash prize ($1.00 or $3.00), a MILLIONS Online satellite ticket (from $5.50 to $530.00) or a $5,300 seat in the target event; and, the more tournaments you play, the more spins you earn: 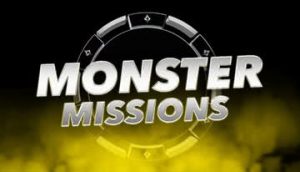 The Monster Missions promotion is all about cashing in Monster Series tournaments and the number of times you reach the Final Table. Although two separate missions in theory, you will only be awarded the top prize you achieve. So, if you cash in thirty tournaments, and reach the Final Table in five of them, you will only be awarded the $530 MILLIONS Online satellite ticket – not the $109 satellite ticket as well. 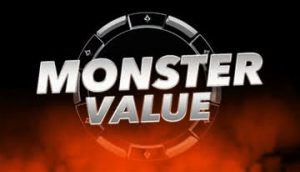 What´s strange about this promotion is that few players will need the incentive of a MILLIONS Online satellite ticket to play in the Championship tournament. Undoubtedly the players who appear on the Final Table will be grateful for the reward, but possibly the money being used to fund this promotion could have been better used to fund a more achievable challenge. 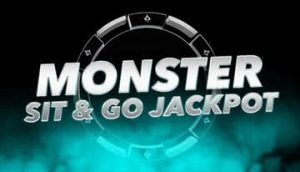 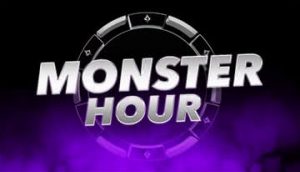 The Monster Hour promotion is identical to the Happy Hour promotions Party Poker frequently hosts for cash game players (so maybe it should have been called “Happy Monster Hour”). During the Monster series, cash game players will be eligible for double cashback points when they play FastForward Poker between the hours of 4:00pm and 5:00pm (GMT) Monday to Saturday or between 2:00pm and 3:00pm (GMT) on either of the Sundays bookending the Monster Series.

Will You be Playing in the Monster Series at Party Poker?

The Monster Series may be a relatively modest tournament series when compared against the site´s regular Power Series schedule and PowerFest events, but it gives players with smaller bankrolls the opportunity to play in large fields, develop their tournament skills, and potentially win an amount that could elevate their bankrolls to PowerFest level.

Certainly during this coming Monster Series, players with ambitions of elevating their bankrolls to a higher level have plenty of opportunities to do so – not only by playing in Monster Series tournaments, but all by benefitting from the supporting promotions that could see them win a seat in the $20 million guaranteed MILLIONS Online event.

So, if you have dismissed your chances of playing in Party Poker´s MILLIONS Online event, you may want to think again. At least one person is guaranteed to win a MILLIONS seat during the Monster Series and there could be dozens more depending on how many times the Monster Wheel is spun or how frequently players cash/reach the Final Table in Monster Series tournaments.

Finally, if you have dismissed your chances of playing in Party Poker´s MILLIONS Online event because you do not yet have an account with the site, head on over to Party Poker today to start your journey to – well, who knows what. There are hundreds of opportunities to enjoy a rewarding experience, starting with a 100% bonus on your first deposit when you use the [geolink href=”https://www.pokernewsreport.com/partypoker”]Party Poker bonus code “PNREPORT”[/geolink].