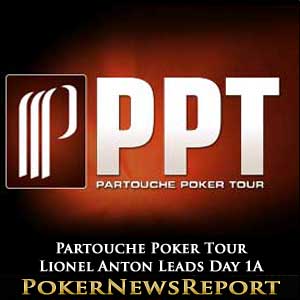 One of the most valuable finales of any European poker tour started yesterday at the Palm Beach Casino in Cannes.

The Partouche Poker Tour is the leading poker tour in France and, like many of the UK poker equivalents, provides a lucrative online qualification route to the Main Event.

This year the feature tournament has a guaranteed prize pool of 4 million Euros with a million of those laid aside for the winner and consequently, thousands of players from all over the country mark this down as their target tournament for the year.

Last year the Partouche Poker Tour Main Event attracted 764 players for the €8.500 buy-in tournament (more than double the number that played in the WSOPE), generating a massive prize pool of €5.6 million and rewarding its winner – Vanessa Selbst – with a whopping first prize of €1.3 million (In comparison, James Bord collected £830.000 for winning the WSOPE Main Event).

Vanessa Selbst has returned to Cannes to defend her title and will be accompanied by many of the world´s leading live tournament poker players.

244 Players Take Their Seats on Day 1A

The first of two Day 1s was played out yesterday over six 90 minute levels. Plenty of top quality players had made the trip down from the recently concluded WPT Grand Prix de Paris to compete in the event including final tabler Martin Jacobson, Day 2 chip leader Franck Pepe and WSOP 6-Max champion Joe Ebanks. Sadly, all three were among the 105 first day eliminations, but fortunately there is a comprehensive side event schedule to keep them amused until the Main Event concludes on Saturday.

Players who are confirmed as playing in Day 1B of the Partouche Poker Tour include Phil Laak, Antonio Esfandiari and Antonin Teisseire. They will be joined by some recent arrivals from Las Vegas Phil Hellmuth and Fabrice Soulier, and rumours around Cannes suggest that we may also be graced by the presence of November Niners Ben Lamb, Phil Collins and Matt Gianetti . Gus Hansen, Jennifer Tilly, Jason Mercier and Chino Rheem have also been whispered as possible participants but unfortunately, Daniel Negreanu is stuck in Budapest.