Giuseppe Pantaleo emerged as a clear leader yesterday in the Partouche Poker Tour Main Event at the Palm Beach Casino in Cannes. 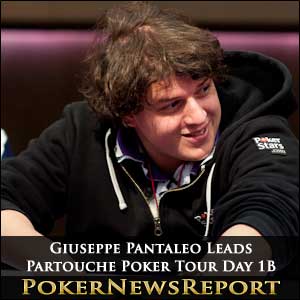 Giuseppe Pantaleo emerged as a clear leader yesterday in the Partouche Poker Tour Main Event at the Palm Beach Casino in Cannes.

Giuseppe Pantaleo – who is actually German and has a deep history of final table appearances in EPL events – plays online as “Le Chiffre” (the bad guy in James Bond´s “Casino Royale”) and “Ansgar2000”.

Pantaleo has recorded more than $1.5 million in online tournament winnings to add to the $400,000 he has collected in live tournament cashes in the past year.

A total of 579 entered the Partouche Poker Tour Main Event, either by qualifying at one of the Partouche Casinos or by ponying up the €8,500 buyin. A total prize fund of €4,921,500 will be distributed among the top sixty-three players, with the winner collecting a cool €1 million and anybody making the final table assured of €100,000.

The Quality of the Partouche Leads to Tough Tables

With so many big names competing in one of Europe´s most valuable events, it is not surprising that there have been a number of tough tables. John Eames was tweeting throughout most of Day 1A about his ongoing battle with Vanessa Selbst, and yesterday we saw Leo Magrets, Jason Mercier and Chino Rheem drawn together, Antonio Esfandiari facing Hugo Lemaire and WSOP Circuit winner  Joseph Cheong playing against runner up in the EPT Madrid High-Roller event Benny Spindler.

Of course, being on an “easy” table does not make the game any simpler. Sam Trickett lost a hand with a flopped top set against a player who stayed in the hand to complete a runner-runner draw before having to chop a pot with AA v AK and Phil Hellmuth (noticeably gracious in defeat again) received an “ugly beat” when getting his A♣ K♣ sucked out by A♠ 10♠ on a board which fell Q♠ Q♥ J♦ / J♠ / 6♠.

Looking Ahead to Day Two

Day 2 (of 5) will consist of five two hour levels for the 321 remaining players, with blinds starting at 400/800 (ante 100), so not many of the players will be in immediate trouble. The Partouche Poker Tour is played in the same way as the World Series of Poker Main Event – where a final table will be played out in November – so we will not find out this week who will be the next €uro poker millionaire, but those who are still in with a very good chance include:-