There was uproar yesterday at the Palm Beach Casino in Cannes after Partouche withdrew the guarantee from their Main Event – two days after the event started! 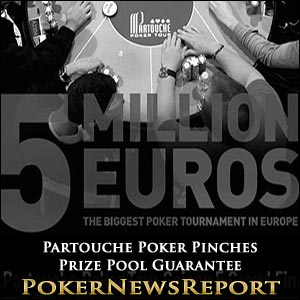 There was uproar yesterday at the Palm Beach Casino in Cannes after Partouche withdrew the guarantee from their Main Event – two days after the event started!

When a major poker tournament offers a fixed prize guarantee, you pretty much expect it to still be in existence the day after you sit down to play in it. Unfortunately it is becoming a habit amongst French poker companies to first announce a guarantee and then withdraw it. First it was the €20 million no-longer-guaranteed ISPT and now the Partouche Poker Tour has got in on the act – announcing a 4.3 million Euro prize pool while their web site still advertises a 5 million Euro guarantee for the Partouche Poker Tour Main Event.

Players at the tournament reacted angrily to the news, with Todd Terry and Justin Bonomo the first to alert poker fans via twitter and asking those following the event to send them screenshots where it could be seen that the guarantee was promised. Word (again via Twitter) from Canadian pro Peter Jetten was that One of the head Partouche people told me “this was not a guarantee but a marketing trick and the online poker forums came alive with tales of how players had been scammed by Partouche Poker in the past.

Vanessa Selbst (winner of the Partouche Poker Main Event in 2010) pretty much summed up how the players in Cannes felt by posting the following on the popular 2+2 forum:-

This is really tilting – I went to the director [Matt Savage] today and he basically gave me the runaround. They very clearly had a guarantee and have now instructed those in charge to delete tweets, they have removed information previously stated on the website, etc. If you google Partouche Poker Tour guaranteed you can see the google cache for what used to be on the website, clearly stating a guaranteed €5M, but now they’ve erased it. I and some other people are boycotting the side events and won’t be returning to this venue. I had really looked forward to the week in Cannes but this is really unacceptable.

Also, I guess no one really knows this, but when I won the tournament two years ago there was €100k removed from the prizepool for the person who was disqualified for cheating. Two years later, that still hasn’t been paid back to anyone. When I asked today, they told me “the case is still pending.”

Tournament Director Has Nothing to Say

Tournament Director, Matt Savage, remained tight-lipped on the latest scandal to hit French poker but generally received a lot of sympathy for the position he had been placed in by Partouche Poker. The consensus of opinion was that the well-respected and well-liked veteran of the World Series of Poker and the World Poker Tour – who was brought in by Partouche as a point of contact for “foreign” players – was too professional to walk out on the event. But, with most foreign players indicating that they will not be returning to Cannes next year, Matt should not bother to renew his contract for 2013!

But “Guarantee” for Winner is Maintained

Incredibly, after various announcements that the 5 million Euros prize fund guarantee had been withdrawn/might be re-instated/was never a guarantee in the first place, Partouche Poker released details of the payouts for those who cash – proudly announcing that they were honouring their promise of 1 million Euros guaranteed to the winner! Consequently, the other 56 players who cash in the event have not only be deprived of a €700,000 overlay but have to contribute a slice of their prize money to the winner.

Meanwhile on the Partouche Tables

After a cancelled press conference, the disappearance of their UK agent and the non-announcement that Patrik Antonius was another new (yawn) ambassador for the ISPT (and the removal of Sam Trickett from the ISPT Facebook page?) the first ISPT online satellites are now available on partouche.fr. (You couldn´t make this up!)