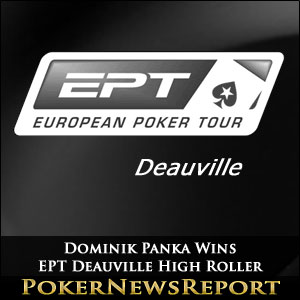 Just three short weeks ago, Dominik Panka was celebrating success in the PokerStars Caribbean Adventure Main Event when an Ace on the River gave him victory over Mike McDonald and set the young Pole on the way to international recognition.

On Saturday, it was a case of déjà vu in the climax of the EPT Deauville High Rollers, as an Ace on the River sealed Panka´s win in the heads-up climax of the event against Albert Daher – the player who had entered the final table of the tournament with a substantial chip lead.

The climax of the EPT Deauville High Rollers took little more than six hours to complete, and it started with two eliminations within the first full level of play (Level 20 – blinds 8,000/16,000 – ante 2,000).

WSOPE Main Event winner Adrian Mateos Diaz was the first player to depart – finding his A♥ 3♥ not good enough to survive past Dominik Panka´s A♣ K♥, and he was eliminated in eighth place.

Kitai Flatters to Deceive and then Runs Into Panka´s Aces

After the interval, Davidi Kitai began to make his presence felt, and moved into second place of the EPT Deauville High Rollers leaderboard by forcing Dominik Panka and Albert Daher out of valuable pots.

However, Martin Schleich twice doubled-up against the former EPT Berlin Main Event winner, and Dominik Panka took the chip lead for the first time in the event when calling Kitai’s all-in bluff with A♠ J♣ and rolling over A♣ A♦.

It was also pocket Aces which saw the ultimate demise of Davidi Kitai – and again in the hands of Dominik Panka. Kitai again tried to force Panka off of a big pot by shoving all-in with 4♣ 3♣, but Panka´s A♥ A♦ held and Davidi Kitai was eliminated in sixth position.

Martin Schleich was the next person to leave the EPT Deauville High Rollers, attempting another double-up with K♣ Q♥ and running into Albert Daher´s A♠ A♣ – Schleich eliminated in fifth place.

Dominik Panka and Albert Daher then combined to send Ondrej Vinklarek to the rail in fourth place – Panka turning a Full House of Kings over Jacks to cripple the Russian, before Daher finished him off A♦ 2♠ > K♣ J♠.

Kent Lundmark´s participation in the EPT Deauville High Rollers Event was only to last several more hands. He moved the last of his stack into the middle with Q♦ 6♦ and Dominik Panka in the Big Blind made the call with K♠ 7♦.

Both players paired their hands on the flop of 10♠ Q♠ K♣, but Panka had the lead as well as the greater number of outs. The A♠ on the Turn presented Lundmark with the opportunity of a chopped pot, but the 2♥ bricked for him on the River and he was gone in third place.

Going into the climax of the tournament, Dominik Panka held a narrow 2,935,000 -v- 2,816,000 chip advantage over Albert Daher; but Daher more than reversed the advantage in the first hand of the heads-up when his A♣ 7♥ turned Trip Sevens.

Panka Battles Back, Calls a Bluff and Wins the High Rollers

Dominik Panka regained the chip lead in the heads-up of the EPT Deauville High Rollers with a series of big pre-flop bets which forced Albert Daher to lay down what Daher referred to as “big hands”. A shove on the board of 2♣ 10♥ 6♣ / J♣ / 5♠ forced Daher out of a million chip pot, and he was quickly in trouble with out a hand going to showdown.

Daher tried to fight back, but on a board of A♥ 5♦ K♣ / 10♣ / 2♠ he tried to force Panka off the pot with his own post-River bet of 500,000 chips – leaving just 200,000 chips behind. Panka did not believe Daher, and made the call, turning over K♥ J♣ for second best pair. Daher sheepishly turned over 9♣ 4♣ for a failed bluff and the tournament was practically over as a contest.

The conclusion of the High Rollers Event came a few hands later, when Dominik Panka moved all-in from the button for 5.5 million chips, and Daher tossed his last 200,000 chips into the middle to call:

Ironically, the flop and Turn of K♥ 2♦ J♦ / 2♠ put Albert Daher ahead in the hand and likely to double up. However, just as in the climax to the PCA Main Event three weeks ago, an Ace landed on the River (A♦) to confirm Dominik Panka as EPT Deauville High Roller Champion.