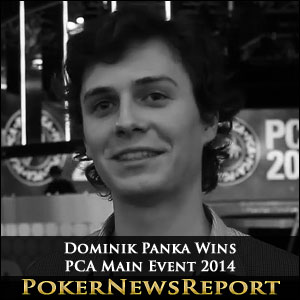 Each of the feature events in the PokerStars Caribbean Adventure of 2014 has been described as out-standing or breathtaking, but none was better than the climax to the PCA Main Event. After five days of action, eight well-stacked players took their seats at the Imperial Ballroom in the Atlantis Resort, each looking to make poker history and collect a seven-figure first prize.

The name on everybody´s lips was Mike McDonald, who would become the first player ever to win two EPT Main Events if he were to achieve success at the final table, but he faced fierce opposition from third on the all-time Argentinean money list Fabian Ortiz, WSOP bracelet winner Pascal Lefrancois and Shyam “g´s zee” Srinivasan, who like McDonald has won more than $5 million on the virtual felt.

The action started as soon as the eight players sat down at the PCA Main Event final table. Mike McDonald (K♠ 10♠) took the overall chip advantage in the second hand, when rivering a straight in a three-way pot against Pascal Lefrancois (Q♥ 8♦) and Isaac Baron (A♦ Q♠), and Dominik Panka moved into a clear third behind McDonald and Muur when his K♥ Q♣ out-kicked Fabian Ortiz´s Q♦ 10♦ on a Queen-high board.

McDonald Pre-Flop Aggression Keeps Him Ahead

McDonald´s elimination of Fabian Ortiz gave him a significant chip advantage over the rest of the field, but Madis Muur was soon in pursuit. Muur chipped up in a three-way pot against Panka and Gamez in which he flopped a set of Eights, and then rivered two pairs with Q♥ J♥ against Mike McDonald´s K♥ 9♦ to inch back into the lead.

However, McDonald´s pre-flop aggression throughout the next level saw him take valuable pots from Madis Muur (A♣ K♠ > Q♠ Q♦), Pascal Lefrancois (Q♠ Q♦ > K♣ Q♥) and Dominik Panka (A♣ Q♣ > J♦ 9♦), without any of the hands seeing flop; and, by the time the dinner gong went, McDonald had re-established a commanding advantage.

The level after the dinner break was a pivotal one. Immediately after Level 30 started (blinds 50,000/100,000 – ante 10,000) we were a player down when Pascal Lefrancois five-bet all-in from the hijack seat with 6♥ 6♠ and Isaac Baron in the Small Blind made the call with A♦ K♣. The flop of 9♥ Q♣ 10♣ kept Lefrancois ahead in the hand, but gave Baron additional outs, before the A♥ was dealt on the Turn to give Baron the hand and send Pascal Lefrancois to the rail in seventh place.

Shyam Srinivasan was soon to follow Lefrancois from the PCA Main Event final table, but was very unlucky in the manner of his elimination. Srinivasan (J♦ J♠) moved all-in from the big blind after Daniel Gamez (A♠ 5♥) had raised from the button and Dominik Panka (10♦ 10♥) had called from the Small Blind. Gamez got out of the way, but Panka called Srinivasan´s shove and the cards were on their backs. Shyam Srinivasan was a good favourite to double up in the hand, but the 10♣ on the flop gave Panka a set of Tens and Shyam Srinivasan was eliminated in sixth place.

Following the eliminations of Lefrancois and Srinivasan, Isaac Baron and Dominik Panka were within one big blind of each other at the top of the leaderboard with +/- 9 million chips, but Mike McDonald was determined not to be left behind as the blinds continued to get higher (now 60,000/120,000 – ante 20,000). McDonald bust Daniel Gamez out in fifth (10♦ 10♠ > Q♥ 10♥) when Gamez missed his flush draw, before losing a hand to Isaac Baron 10♠ 7♠ > 7♥ 7♣ when Baron did make his flush draw.

However, it was Dominik Panka who was to take the lead into three-handed play when he eliminated Madis Muur A♥ K♣ > Q♦ 10♣, after which the three players negotiated a deal that would see them lock up the following amounts, with $100,000 to play for in addition to the EPT trophy and a fancy watch:

Baron in Freefall as McDonald Closes in on Panka

Despite a deal being negotiated, the speed of the action slowed down. Mike McDonald got three streets of value from Dominik Panka when his A♠ 10♣ out-kicked Panka´s A♣ 6♥ to move into second place, and he then took a massive pot against Baron (K♥ Q♠ > A♠ K♠) which elevated him into the chip lead and reduced Baron to 5.4 million chips (34 Big Blinds).

Going into the climax of the PCA Main Event, Dominik Panka had a 16.9 million -v- 13.655 million chip advantage over Mike McDonald, but all that was to change in the first hand of the heads-up when McDonald rivered a Ten-high straight to best Panka´s flopped two pair and capture a 5 million chip pot. McDonald picked up another pot approaching 5 million chips when his K♣ 3♠ rivered Trip Threes, and he established a 2:1 chip advantage before the end of the level when pairing his Ten to take another valuable pot Q♥ 10♣ > K♣ 5♠.

As the new level began, Dominik Panka extended his lead still further by forcing McDonald out of a hand when his K♦ 10♥ had flopped top pair, and then shipping a six million chip pot when his Q♠ 5♦ made bottom pair and McDonald (9♦ 7♥) failed to make his gutshot straight. Staring at a chip disadvantage of 5.9 million -v- 24.6 million, McDonald shoved all-in in the next hand and Panka made the call.

The flop of 2♠ 5♠ J♥ paired Panka´s deuce, but the Turn of 7♥ put McDonald into the lead and it looked as if a double-up was on the cards until the A♣ spiked on the River to give Dominik Panka two pairs and the title of PCA Main Event champion – Poland´s first EPT Champion in ten series of the Tour.