Panel Set For Senate Hearing On Online Poker and Gaming

The United States Senate Committee on Indian Affairs has announced the panel of witnesses scheduled to testify at the upcoming February 9 hearing entitled by Senate lawmakers as an “Oversight Hearing on the U.S. Department of Justice Opinion on Internet Gaming: What’s at Stake for Tribes.” 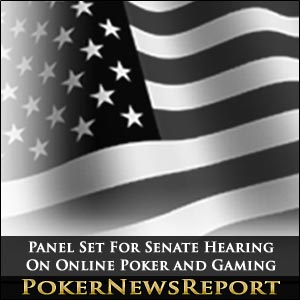 The United States Senate Committee on Indian Affairs has announced the panel of witnesses scheduled to testify at the upcoming February 9 hearing entitled by Senate lawmakers as an “Oversight Hearing on the U.S. Department of Justice Opinion on Internet Gaming: What’s at Stake for Tribes.”

This will be the second hearing on internet gambling before this particular Senate committee. The first hearing took place in mid-November of 2011 and debated “The Future of Internet Gaming: What’s at Stake for Tribes.” That hearing centered on how federal legalization of online poker and gambling would affect tribal interests. Thursday’s hearing will focus on how the DoJ opinion released in December, which found that the 1961 Wire Act is applicable only to sports betting, will impact tribal gaming interests.

The Feb. 9 powwow will consist of three panels. The lone witness of Panel #1 is the Honorable Robert Odawi Porter, President of the Seneca Nation of Indians in Salamanca, NY. Panel #2 will be seated by three witnesses: Kevin K. Washburn, Dean of the School of Law Administration at the University of New Mexico, Albuquerque, NM; I. Nelson Rose, noted gaming expert and Senior Professor at Whittier Law School in Encino, CA; and Alex Skibine, Professor, S.J. Quinney College of Law, University of Utah, Salt Lake City, UT. The third panel is comprised of Patrick Fleming, Litigation Support Director for the Poker Players Alliance, Washington, DC, and lastly, Glenn Feldman, an Attorney with the firm of Mariscal, Weeks, McIntyre & Friedlander in Phoenix, AZ.

Various Indian tribes are still not in agreement as to whether online poker and gambling will have a positive effect on tribal gaming interests. At the first Senate hearing in November, Tulalip Tribe Vice Chairman Glen Gobin spoke out against online gambling, saying, “The legalization of internet gambling comes at a risk to tribal economies. The proponents that seek to legalize internet gambling say it will create $41 billion over the next ten years. However, let’s not forget that Indian gaming will provide $256 billion in the same period.”

However, that view was in direct contrast to that of Mohegan Tribe Chairman Bruce Bozsum, who was overly supportive of online poker and gambling legislation. “There are no boundaries,” Bozsum said, of the benefits and revenue that tribes would see from regulated online gambling. “It’s an opportunity tribes should not miss.”

The DoJ opinion to be discussed at the hearing has many individual states clamoring for the opportunity to provide online poker to their residents on an intrastate platform. It is widely believed that intrastate poker would be only the first step in the expansion of [geolink href=”https://www.pokernewsreport.com/us-poker-sites”]online poker in the U.S[/geolink]. The next step would most likely be for participating states with legalized poker in place to enter into a consortium that would allow online poker players to play against players in other states where internet poker would also be legal, an interstate format, thereby increasing liquidity and player pools.

However, federal lawmakers are concerned that laws enacted by individual states will create a hodgepodge of state regulations that would complicate matters on a federal level. The scuttlebutt in the industry is that federal legislators realize that it would be more beneficial to legalize online poker and gambling on the federal level prior to individual states enacting legislation of their own.

The oversight hearing is slated to begin at 2:15 p.m. in Room 628 of the Senate Dirksen Building in Washington, D.C. A webcast of the hearing will be available at the Senate website of www.indian.senate.gov. Poker News Report, of course, will bring you details of the hearing, as well as all other issues related to poker.