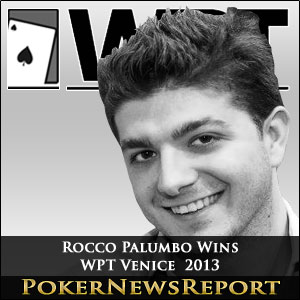 The Italian poker player, who had been crippled by Stephen Behm on Day 2, made a remarkable comeback to overcome the six-handed final table against vastly more experienced players including the likes of chip leader Marcello Montagner, Poker Hall of Famer Mike Sexton and Erion Islamay – who was making his third successive cash in the WPT Venice Main Event.

Islamay and Lin First to Leave

Any illusion of an early calm over the final table was quickly shattered as Erion Islamay (A♠ 6♥) went for the steal from the button and was called by Marcello Montagner (10♥ 10♦) from the big blind. The flop of 10♣ 8♠ 5♥ gave the chip leader a set, and Islamay was bust from the final table in sixth position.

Shortly after, Rocco Palumbo had found A♦ A♠ to double up against Robert Begni (A♣ Q♠), but it was becoming a frustrating afternoon for Xia Lin – who had shoved three times without getting a call. When he shoved for the fourth time, it was with A♦ 6♦ and Lin ran straight into the A♠ J♥ of Palumbo which, as well as being way ahead, completed a straight on the Turn to bust Lin out in fifth.

Palumbo Applies the Pressure as Begni and Sexton Depart

With his enhanced stack of chips, Rocco Palumbo became far more active. After taking a 1½ million chip pot from Montagner with a turned full house, he captured eight of ten hands in Level 25 (blinds 15,000/25,000 – ante 5,000) without one going to showdown.

Montagner recovered from his setback against Palumbo to eliminate Robert Begni in fourth (J♦ 2♣ > A♦ 6♠ – Montagner taking the hand with the 2♠ on the river) and bust Mike Sexton in third A♠ 7♦ > J♥ 9♥ – Montagner hitting two-pair on the turn after Sexton had flopped top pair). Even still, he was still a million chips behind his compatriot going into the heads-up.

Rocco Palumbo´s aggression was the telling factor in the climax to the WPT Venice Main Event and the conclusion was reached within 40 minutes. In the final hand, Montagner (9♣ 9♥) three-bet to 170,000 chips pre-flop and Palumbo (J♣ 8♠) made the call.

Following the flop of J♦ 10♠ 8♣, Montagner was again the aggressor – betting 180,000 chips to which Palumbo responded by raising to 480,000 chips. Following the turn 4♦ Montagner moved all-in with his pocket Nines and Palumbo, who had flopped two pair, snap called.

The river card of 3♠ was not one of the outs Montagner needed to remain alive in the WPT Venice Main Event and Rocco Palumbo scooped the $180,097 first prize which included a seat at the WPT World Championship tournament at the Bellagio next month.