Argentinean poker player Pablo Tavitian has a narrow chip advantage in the EPT Barcelona Main Event as the remaining 235 players head towards the money. 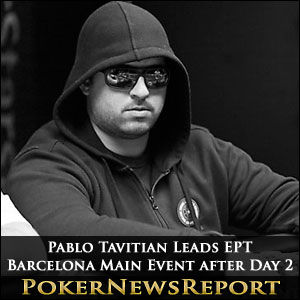 Argentinean poker player Pablo Tavitian has a narrow chip advantage in the EPT Barcelona Main Event as the remaining 235 players head towards the money.

The international appeal of the European Poker Tour was epitomised yesterday by players from ten different countries featuring in the top twelve chip counts at the end of the day, and the event headed by a player who had crossed an ocean to compete in the EPT Barcelona Main Event.

Pablo Tavitian has enjoyed success in a PokerStars sponsored event before – winning the LAPT Chile National Poker Championships in March this year for $184,200 – but this is his first excursion across the Atlantic to compete against Europe´s finest; and although his rise to the top of the chip counts did not include the elimination of any poker SuperStars, he remains the man to catch.

The first few levels of Day 2 of the EPT Barcelona Main Event set the tone for the remainder of the day. As the 697 survivors from the two opening days combined (plus a few stragglers who late-registered into the tournament) the aggression on the tables reached new heights, with Jason Mercier (A♦ K♦) one of the first players to leave the Hotel Arts after losing a coinflip against Mickey Petersen (Q♥ Q♣).

Mercier was followed out into the Barcelona sunshine by Eugene Katchalov, whose pocket Kings failed to improve against Max Greenwood´s pocket Aces, Fatima Moreira De Melo – who lost a K♣ Q♣ race against Jack Salter (7♥ 7♣) – and Jonathan Duhamel (A♦ 10♣) whose situation was fairly hopeless against the A♠ K♠ of Timofey Kuznetsov.

Not a Good Day for the Natives

Throughout the day the volume of the room decreased as many of the Spanish players attempting to be the first of their countrymen to win an EPT Main Event perished. Although Day 1A chip leader Dragan Kostic still remains alive, his chip stack was substantially reduced during Level 12 and only a last minute double-up enabled him to head forward into Day 3 with a workable stack.

However, Alejandro Perez Torres gave the home contingent something to cheer about – especially after an unlikely double up in Level 13 when he got all his chips into the middle pre-flop with A♣ K♣. His opponent took more than five minutes to make the call (with A♦ A♥) and was justify bust from the tournament when two red Kings were dealt on the Flop – giving Torres Trips, and a substantial leap up the leaderboard.

When play resumes at the Hotel Arts this afternoon, the shortest-stacked of the 235 players will be keeping a very considered eye on the huge scoreboard that reveals how many players remain. The top 183 players will share in the €5,984,900 prize fund, with €1,067,000 up top for the winner of the EPT Barcelona Main Event.