Substantial overlays are expected in several of Party Poker´s “Power Series” tournaments this week due their format changing from re-entry to freezeout. 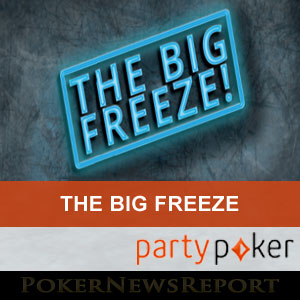 Substantial overlays are expected in several of Party Poker´s “Power Series” tournaments this week due their format changing from re-entry to freezeout.

Back in November last year, Party Poker rebranded its major poker tournaments as the “Power Series”, with each event having a boxing-themed name as a nod to the site´s sponsored sports star Carl Froch. The Power Series is comprised of more than 150 multi table tournaments each week with guaranteed prize pools in excess of $1.6 million.

Due to the comprehensive satellite structure into these tournaments, they have been relatively successful. Nonetheless, many players avoid them due to the extended late registration periods during which the opportunity exists for unlimited re-entries. Now, for one week only, Party Poker is running some of the Power Series events as freezeout tournaments in a promotion called the “Big Freeze”.

The events included in the Big Freeze promotion take place every day at 7:00pm GMT. For players with modest bankrolls, “The Jab” is a $5.50 buy-in tournament with a guaranteed prize pool of $10,000. At the same time, players prepared to back their poker skills in a tournament with a $22.00 buy-in can take part in the $20,000 guaranteed “Contender”.

Players not yet signed up with Party Poker can also take advantage of a 100% match bonus on their first deposits when creating an account with the Party Poker bonus code “[bonuscode room=”partypoker”]”. This is a first deposit which is not advertised on the Party Poker web site and is exclusive to readers of PokerNewsReport.

The Party Poker bonus is released in released in increments of 10% of the bonus value as players collect Party Points for contributing to the rake deducted from cash game pots or for paying a fee to enter a Party Poker tournament.

Each increment is released when players have collected 8 times its value on Party Points. So, if a player were to make a first deposit of $250, they will receive $25.00 of their bonus each time they collect 200 Party Points. It is a very easy-to-clear bonus within the 120 days allowed.

Remember, the “Big Freeze” promotion takes place this week only until Sunday 24th January. So, if you are not yet playing at Party Poker make sure to visit the site, create your account and make your first deposit today using the Party Poker bonus code “[bonuscode room=”partypoker”]”.