Brett Angell confessed to feeling “outstanding” after winning the UKIPT London Main Event for £115,083 and a seat in today´s UKIPT Champion of Champions event. 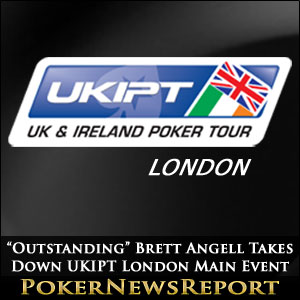 Brett Angell confessed to feeling “outstanding” after winning the UKIPT London Main Event for £115,083 and a seat in today´s UKIPT Champion of Champions event.

The climax of the UKIPT London Main Event ended in an overdue victory for Teeside IT consultant Brett Angell, who has been trying to capture a UKIPT title ever since finishing second in the UKIPT Newcastle back in 2011.

Saying that he had been the butt of some unkind ribbing by his workmates, Angell said that he would continue working despite his UKIPT success because poker is too unpredictable. However, after yesterday´s victory, he intends to stick around in London to play in the EPT London Main Event and participate in today´s UKIPT Champion of Champions tournament.

Angell Gets his Wings Clipped during Early Action

Going into the final table of the UKIPT London Main Event, Brett Angell had a substantial chip advantage over his opponents, and he briefly took advantage of his superior stack to extend his lead. However, Angell lost two flips in successive hands to reduce his chip stack to 4.5 million chips – the happy beneficiaries being Sandro Mescola (A♠ K♥ > Angell´s 9♠ 9♣) and Fabrizio Fuchs (A♦ J♥} > Angell´s 6♥ 6♣).

Angell was also involved in one of the biggest pots of the tournament to date when calling Vladimir Troyanovskiy´s shove and both players turned over pocket Jacks. However, unlike on the penultimate day of the UKIPT London Main Event – when Brett Angel rivered a diamond flush A♦ K♠ > Troyanovskiy´s A♠ K♥ – there was no drama on the Nine-high board and the pot was chopped.

After three hours of play, the final table of the UKIPT London Main Event was still to witness its first elimination; however Mark James turned set of Sixes against Rasmus Agerskov´s flopped pair of Kings started a sequence that would see six players depart the final table in little over 1½ hours.

Fabrizio Fuchs eliminated Caicai Huang in seventh place when he rivered a set of Sixes to best Huang´s missed Ace-high straight, and he then rivered a set of Fours to cripple Vladimir Troyanovskiy prior to busting the Russian high roller in sixth place A♥ A♣ > A♦ 8♥}. Brett Angell temporarily regained a clear advantage when sending Nickolas Davies to the rail in fifth spot A♦ K♣ > A♥ Q♦, but lost a million chip pot to Fabrizio Fuchs almost immediately to also lose the chip lead.

Brett Angell then regained the chip lead when eliminating Sandro Mescola in third place K♦ 10♦ > K♥ 3♦ and took a 12,425,000 -v- 9,230,000 chip advantage into the heads-up against Fabrizio Fuchs, at which point the clock was stopped while the two players agreed a deal. Eventually it was decided that Angell would lock up £105,083 while Fuchs would be guaranteed £98,717 with £10,000 and a seat in the Champion of Champions final to play for.

Big Slick Does the Job for Brett Angell

Despite a deal being agreed, the heads-up conclusion of the UKIPT London Main Event took a while to be decided. Brett Angell constantly put pressure on Fabrizio Fuchs´ chip stack, but a double-up for Fuchs 6♥ 6♠ > J♦ 2♦ on a two diamond flop enabled him to return the respective chip counts to where they were at the beginning of the encounter.

As the blinds rose to 100,000/200,000 (ante 30,000) the deciding hand was played out. After some aggressive pre-flop action, Fabrizio Fuchs moved all-in for his last 7 million chips and Brett Angell made the call:

The flop of 4♥ 2♦ 4♠ presented the opportunity of a chopped pot, but the Turn (3♥) and River (8♦) blanked for Fuchs, giving Brett Angell the title of UKIPT London 2014 Champion.

In addition to his £115,083 prize money, Brett Angell also won a seat in today´s UKIPT Champion of Champions tournament featuring all the winners from the UKIPT Season 4 Main Events plus the online qualifier of the year Dara O´Kearney. The tournament will take the format of a sixteen player Sit n Go and the winner will receive all his buy-ins for Season 5 of the UKIPT plus hotel accommodation and travel expenses.