Our Picks for the GPI American Poker Awards (Part 1)

The shortlist for the Global Poker Index´s American Poker Awards has just been released containing some interesting contenders for the prestigious awards. 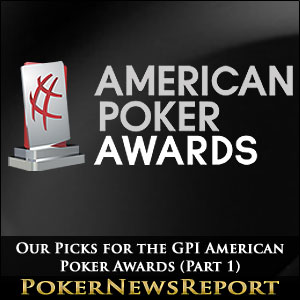 The shortlist for the Global Poker Index´s American Poker Awards has just been released containing some interesting contenders for the prestigious awards.

On February 27, two hundred guests will attend the first ever GPI American Poker Awards at the luxurious SLS Hotel in Beverley Hills. Thirteen awards in total are up for grabs – ten decided by a panel of judges from the industry, two by their GPI rankings for 2014, and the award for “Poker´s Best Ambassador” being determined by a public online vote.

Without wishing to influence the panel of judges (too much), we present our arguments on who we would like to pick up the other awards in the first of a two-part GPI American Poker Awards special. The final decisions will not be made until the morning of the award ceremony, so – if you are on the judging panel – we hope you take our opinions into account.

Tournament Performance of the Year

With all due respect to Moshin Charania, his victory in the WPT Five Diamond World Poker Classic came courtesy of a lucky river card (similar to his victory in the 2013 WPT Paris); and. although Mark Newhouse made history by reaching consecutive final tables of a WSOP Main Event, blowing your stack on a pair of Tens does to finish ninth not constitute a tournament performance of the year!

Darren Elias´ victory over Kane Kalas in the WPT Borgata Open was something special but (in our opinion) the way in which Daniel Colman dominated the final table of the Seminole Hard Rock Poker Open Main Event was the stand-out performance of the year among those who were nominated for this award.

Breakout Player of the Year

Depending on how you interpret “Breakout”, any of the four players nominated for this award could go home with a nice adornment for their mantelpiece. There is no doubt that Dan Colman had a sensation year – as did Mukul Pahuja by capturing the title of WPT Player of the Year without winning a single WPT event!

Jake Schindler was definitely the breakout high roller of the year – kicking off 2014 with victory in the PCA High Roller, taking down the Bellagio Summer High Roller, cashing in the two Estrellas Barcelona High Roller events and winning the Seminole High Roller – but our vote goes to Brandon Shack-Harris for his run of final table appearances at the WSOP in the summer and for giving George Danzer a good fight for WSOP Player of the Year.

Again, how you determine an “Event of the Year” is open to interpretation. Is it because it is the best organized, the most valuable, gets the most players or creates the most media attention? In terms of climatic finishes, each of the tournaments had its moments, but none more so than Daniel Gagnon´s victory in the WPT Montreal at the Playground Poker Club.

Coming into the final table, Gagnon was the chip leader courtesy of flopping a set of Threes to crack Gabriel Veniza´s pocket Aces. He then bust opponents with A♦ 7♠ > A♥ K♣ and A♦ 6♦ > A♥ 8♥, and hit a runner-runner Ace-high flush to best a set of Nines. The selection of the WPT Montreal as the Event of the Year may not be agreed upon by industry experts, but to the casual observer it was a compelling event.

Using the criteria of most dramatic conclusion to an event to determine the outcome, it is a close call for “our” award between Jonathan Dimmig´s victory in the Millionaire Maker and Sean Yu´s win in the WPT500 – both players making sensational recoveries from being virtually eliminated. For the drama content alone, we are going with Sean Yu and hope we haven´t blighted his chances of winning an award by our selection.

Of the other two nominees, Jeff Masden´s victory in the HPT Californian State Poker Championship was rather a one-sided affair (although Masden needed a fortunate card on the river to seal victory) and Hugo Pingray´s win in the WSOP Monster Stack was helped by a number of coinflips going in the Frenchman´s direction.

Two of the awards have already been decided – Dan Colman being the 2014 GPI Player of the Year and Vanessa Selbst winning the 2014 Female GPI Player of the Year based on their GPI rankings – and members of the public can get involved with choosing “Poker´s Best Ambassador” by visiting the American Poker Awards website and nominating a poker player from North America (inc. Canada) who has made a positive impact on poker while engaging its fans.

On reflection of events over 2014, our vote goes to Daniel Negreanu. Despite being the butt of some pretty cruel jokes, outspoken Negreanu is well respected amongst poker players both live and online (even when he has a go at them). He justifiably won the GPI´s “Player of the Decade” and was inducted into the WSOP´s Poker Hall of Fame last year. Our vote is admittedly influenced by the way Negreanu conducts himself on social media – upholding basic values while still coming across as rather quirky!

Our Picks for the GPI American Poker Awards (Part 2)

Make sure you visit PokerNewsReport.com tomorrow for part 2 of our picks for the GPI American Poker Awards in which we will be analyzing the categories of:

We will also be revealing who we think should be given the Lifetime Achievement Award, and our opinion may well surprise a few people. Follow @PokerNewsReport on Twitter to make sure you don´t miss our possibly controversial selection and, if you have an opinion on our choices for the American Poker Awards, please let us know in the comments box below.