33 year-old Swede, David Ostrom, leads a strong field at the PokerStars.fr sponsored EPT Deauville Main Event in the pursuit of the €770,000 first prize. 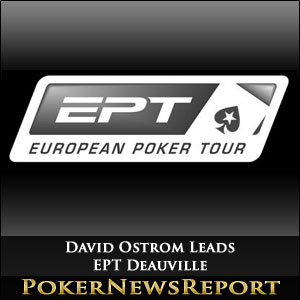 33 year-old Swede, David Ostrom, leads a strong field at the PokerStars.fr sponsored EPT Deauville Main Event in the pursuit of the €770,000 first prize.

As the two Day 1 fields combine in the €5,300 buy-in EPT Deauville Main Event, Swedish qualifier David Ostrom holds a narrow lead in the chip counts from Slovenia´s sole representative Casey Kastle, with Day 1A´s top chip chap – Jesper Fetterson (who is only playing because he mis-clicked into an online qualifier which he then won) – back in third.

French Out In Force In Normandy

As you might expect, the home contingent are well represented in this tournament. 49 percent of the 782 players who started the Main Event are French, with relatively miniscule representation (5 percent) from the UK, Russia and Germany. When all the entries were counted, the prize pool for the Main Event amounted to €3,753,600, which will be shared among the top 120 players.

430 players remain in the EPT Deauville Main Event as Day 2 starts. Players hoping to make it through to Day 3 will have to negotiate a further eight 75-minute levels which start today at Level 9 (blinds 400/800 – ante 100) and avoid the cruel twists of fortune which saw several players eliminated from the tournament on their respective Day 1s.

Aces No Good for Akenhead and Neuville

Leading UK player James Akenhead was just one of a number of players who tasted ill fortune on Day 1. Getting all his chips in the middle with A♦ A♠, he was called by French player Paul Guichard, holding no better than A♥ K♦. However, the flop of 6♥ K♠ K♣ effectively put Akenhead out of the competition – despite dectupling up his last 50 chips in the very next hand!

Losing with Aces was even harder to bear for Pierre “Zoutechamp” Neuville after he got all his chips in with A♦ A♥ on the flop of J♥ 3♦ 10♦ and was called by Joseph Jazzar (K♦ K♣). The turn of 9♥ and river of Q♠ gave Jazzar a runner-runner straight and knocked Neuville down to his last 175 chips. Jazzar finished the day on 82,500 chips.