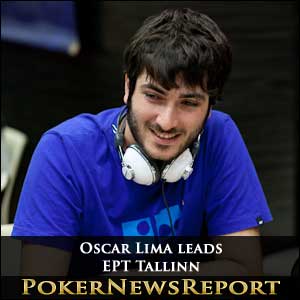 The 23-year-old from Zaragoza was joined by 189 other starters for Day 1’s second string to bring the event total to 282, which is significantly lower than the 420 players who lined up for last year’s main event in the capital city.

However, online specialist Lima – who made a late charge to build up his stack at the sumptuous Swissotel – begins today’s Day 2 on 132,000 chips, with experienced Finn Jani Sointula, who is an EPT regular, second on 123,950 as 60 players hit the rail.

Meanwhile, Lima moved along quietly for the majority of the day, but will be a target for many entrants this afternoon.

Incredibly, this is his first EPT event – and the only reason he chose this poker tournament to make his debut is because it’s the opener on the tour’s eighth season.

Sointula regularly plays at the world’s biggest poker tournaments and built his starting stack of 30,000 up to 77,000 by the close of level two, before leaping up the leaderboard into second spot ahead of the tournament director announcing the end of play.

The Finnish star may not have won an EPT title, but did secure a runner-up spot to Argentinian Nacho Barbero in last year’s £20,000 High Roller Event at EPT London.

A total of 198 players return for Day 2 in this year’s European City of Culture, with the likes of Team PokerStars Pros JP Kelly, Ville Wahlbeck and Dario Minieri joining team-mates Marcin Horecki, Arnaud Mattern and Richard Toth from Day 1A.

Kevin Green leads the British charge on 65,750 chips, while Charles Clark, Matthew Ashton and Chris Brammer will all be back this afternoon.