The final day of the Borgata Winter Poker Open Event #1 was cancelled after it was discovered that one or more players had introduced fake chips into the game. 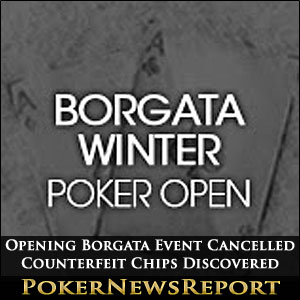 The final day of the Borgata Winter Poker Open Event #1 was cancelled after it was discovered that one or more players had introduced fake chips into the game.

Twenty-seven players remained in Event #1 of the Borgata Winter Poker Open – which was scheduled to conclude on Friday evening – when it was discovered that there were more than a million chips in circulation than there should have been.

Various theories were suggested about how the discrepancy could have occurred – including that errors were made during the chipping up process, or that some player´s entries had not been recorded – but, once photos started to circulate on Twitter of “fake” tournament chips with a value of $5,000, tournament director Tab Duchateau suspended the event for 24 hours and called in investigators from the New Jersey Division of Gaming Enforcement (NJ DGE).

Hopes of a Resumption Dashed by NJ DGE

Hopes that the situation would be resolved quickly, so that the tournament could be concluded, were dashed on Saturday evening when Tom Ballance, President and Chief Operating Officer of the Borgata Hotel Casino and Spa, announced that the NJ DGE had ordered the cancellation of the tournament due to the pending investigation.

Ballance said Thus far, investigators have found that one or more tournament entrants improperly introduced a significant number of counterfeit chips into the tournament, gaining an unfair advantage and compromising the integrity of play for the event; but he added that an audit had been conducted on the remaining poker chips in the Borgata´s inventory and that the remaining Winter Poker Open schedule would proceed as planned.

Details also later emerged that the 423 players who had already cashed in the tournament would be allowed to keep their winnings, while the unpaid prize pool of $1,433,145 would be held in escrow until it could be confirmed that none of the remaining twenty-seven players had been involved in compromising the tournament.

With many players already having committed to playing in the Borgata Winter Poker Open series, the counterfeit scandal had no impact on the number of players entering subsequent tournaments in the Series over the weekend. Despite the serious nature of scandal, attendance figures continued to surpass those from previous Borgata series – with five tournaments concluded to date: