Four major live poker events are taking place within two weeks of each other in the capital of the Czech Republic – Prague – and you can be there courtesy of four major poker sites, all offering a qualification route via online poker satellites. 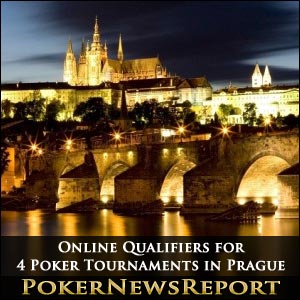 Four major live poker events are taking place within two weeks of each other in the capital of the Czech Republic – Prague – and you can be there courtesy of four major poker sites, all offering a qualification route via online poker satellites.

Players who fancy a fortnight away from the miserable north European weather will be delighted to discover that Prague is usually crisp but clear this time of year (Max temp 2º C, but less than one inch of rain in the month), making it far more fun than trudging around your local high street looking for Christmas presents in the rain (Bah! Humbug!)

There is not too much over-lapping of events and, with the exception of the iPOPS Live tournament, a healthy schedule of side events will keep those unfortunate to be busted out in the early stages of a Main Event occupied – until the next one comes along.

The “Prague Quartet” kicks off with the €3,500 buy-in World Poker Tour Prague Main Event in the city´s Corinthia Casino. This is the first time that Prague has been included in the World Poker Tour and, after the success of recent European WPT´s – where the last three winners have collected more than €1 million between them(*) – expect another bumper attendance.

Amneville runner-up, Jordaine Ouin, collected €170,365 after entering a €33.00 online poker qualifier with Party Poker, and if you are quick, you can still catch the last of the satellites prior to the beginning of the WPT Prague.

Although it might be the first time that the World Poker Tour has scheduled Prague into its portfolio of events, for PokerStars this will be the fifth time that the European Poker Tour has set up camp in the Czech capital. Previous winners of the EPT Prague Main Event include Roberto Romanello, Salvatore Bonavena and Arnaud Mattern, and last year a record 563 players entered the €5,300 event – creating a prize pool of €2.7 million and a first prize of €640,000 – Happy Christmas!

For those without five grand in their pockets, PokerStars are hosting a satellite series which starts from just $0.33 and culminates with a €530.00 buy-in final on Sunday 27th November – guaranteeing a minimum of five EPT Packages which include flights, accommodation, Main Event buy-in and a little bit of spending money.

Point of Note: Rihanna plays at the O2 Arena in Prague on December 7th. The O2 Arena is just a short taxi ride (5Km) from the Golden Prague Poker Casino (in the Hilton) where the EPT Prague is being hosted, and this is not a show to be missed – if you can get tickets!

The climax of the iPoker Online Poker Series (iPOPS) takes place at the Card Casino in Prague between 9th and 11th December, when the final 27 players in the iPOPS Main Event (iPOPS #4) will be flown to the casino for a massive welcome party and to compete for their share in the $500,000 guaranteed prize money over three days.

At the same time, the casino will be hosting the €770.00 buy-in iPOPS Live Open. Live registration is only available on the day of the event, but you can also qualify for this major European live tournament through William Hill Poker, with the satellite route starting from just $0.12.

Just as the debris from the WPT Prague has been cleared away at the Corinthia Hotel, the Grand Series of Poker (GSOP) tour arrives. The GSOP may not have the pedigree of the WPT or EPT, but regularly sees six-figure prizes going to their Main Event winners, and most recently saw a record field of 345 compete for a prize pool of €528,699 (Sergio Aguilar defeating Stefan Genchev in the heads-Up).

Coming just after the WPT and EPT (and picking up refugees busted out of iPOPS), the GSOP Main Event only has a buy-in of €1,650 and a packed schedule of side events to keep the most discerning of poker players entertained – and give them an excuse to avoid returning home to do the Christmas shopping! Also, as the climax of the Prague Poker Festival, expect a lot of players to get involved who would not usually travel to a GSOP event.

Qualifiers for the GSOP Main Event are available throughout the run up to the feature tournament on GuruPlay Poker – where you can either qualify for a seat only (if you are going to be in Prague anyway) or go for the amazing value €3,600 package, which allocates €1,250 for accommodation (“penthouse please”) and €700 for flights and spending money. With flights currently costing around£150.00 from most UK destinations, that will leave plenty of cash in your pocket for sight-seeing the delights of Prague.

With four major events on in the space of two weeks, better book that hotel accommodation early!