The governor of Maryland has asked Congress to remove the proposed bills to legalize online poker from the federal agenda because he believes online gaming would destroy Maryland’s state lottery. 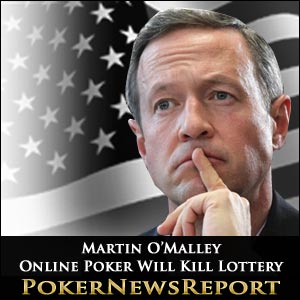 The governor of Maryland has asked Congress to remove the proposed bills to legalize online poker from the federal agenda because he believes online gaming would destroy Maryland’s state lottery.

Governor Martin O’Malley sent a letter to Sen. Patty Murray, D-Wash, and Rep. Jeb Hensarling, R-Texas, of the Joint Select Committee on Deficit Reduction, explaining his position on the online poker legislation. Murray and Hensarling co-chair the congressional “supercommittee” that is searching for additional revenue to trim approximately $1.5 trillion in federal debt.

“Such proposals would diminish significant sources of revenue for the states when we have already had to endure significant revenue reductions,” O’Malley wrote in the letter.

Many politicians and gaming industry insiders believe the 12 members of the supercommittee may take a look at regulating online poker to establish a new tax revenue that would greatly reduce budget deficits.

Two bills proposing legalization of online poker are currently in Congress and the House Subcommittee on Commerce, Manufacturing and Trade will hold a hearing entitled “Internet Gaming: Is There a Safe Bet?” on Tuesday. One of the proposed bills, H.R.2366, introduced by Rep. Joe Barton, R-Texas, allows for individual states to opt-out of federal gaming regulations if they so choose.

O’Malley said that federalizing online poker would hurt revenues of individual states and threaten economic recovery in the U.S.

“Historically, states have had the right to make their own decisions about whether to offer gambling and how to regulate the industry,” O’Malley said. “These proposals would strip states of those rights.”

Maryland’s lottery generates $519 million every year, fourth-largest producer of revenue for the state. The lottery has been legal in the Old Line State since 1972. Six casinos offering only slot machines were legalized in 2008.

“(Internet poker) would also jeopardize the dollars for K-12 public education, community colleges, and four-year colleges and universities that are generated by new slots locations in our state,” O’Malley said.

Several readers of an internet public forum expressed outrage at some of the comments made by O’Malley. Many have stated that poker is a game of skill and lottery is sheer luck and that poker players are, by and far, not lottery players. Therefore, revenue from poker and lottery would come from two seperate “pools” of people, so to speak. Another reader’s comment suggested that if what O’Malley says is true, then lottery sales would have skyrocketed following the poker shutdown on Black Friday.