The “Online Poker Watchdog” is an independent body which monitors millions of poker hands played online to track whether the virtual felt is rigged or if the online poker sites live up to their claims of fairness and security. 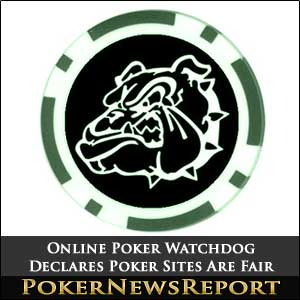 The “Online Poker Watchdog” is an independent body which monitors millions of poker hands played online to track whether the virtual felt is rigged or if the online poker sites live up to their claims of fairness and security.

Using a mixture of hands played at low, middle and high stakes in heads-up, short-handed and full ring cash games, as well as a comprehensive selection of hands played in Sit ´n´´ Go and multi table tournaments, the organisation has produced results which would indicate that the poker sites they have tested are indeed fair.

The Entraction Network may not be the busiest of the [geolink href=”https://www.pokernewsreport.com/online-poker-rooms”]online poker sites[/geolink], but players from skins such as Bettson Poker, Devilfish Poker and Victor Chandler Poker will be delighted to discover that their network is the latest to pass the OPW´s fairness test.

Throughout July, the watchdog isolated 27,986 hands on the 6-Max $0.10/$0.20 cash game tables where two players where in pre-flop all-in situations. Using odds calculators to establish who was ahead or behind prior to the board cards being drawn, they could determine what percentage of hands should have won on each occasion.

Had the Entraction Network been biased against good players, the results would have shown the “behind” hands winning more than their fair share of coin-flips. Instead, this is what happened.

A similar test was conducted on the Merge Network (which may or may not resume accepting American players this month at the $0.25/$0.50 heads-up tables between April and July. Although not having so many all-in situations to compare in the heads-up game, the results were remarkably similar to those from the other online poker sites.

The OnGame network came in for a lot of criticism when CEO Peter Bertlisson announced a “player evaluation system” which would match players of the same standard at the tables to encourage fish to stay on the site for longer instead of migrating to other poker sites when they lost their bankrolls.

How this player evaluation system works is a closely guarded secret, and many interpreted Mr Bertlisson´s statement as an indication that the tables were rigged to enable poor poker players to win more frequently. However, the results generated in the Online Poker Watchdog´s test would beg to differ.

Say what you like about Party Poker (disgraceful rake, poor customer service, Tony G), it continues to be a major player in the online poker world. The poker site has maintained a loyal European client database throughout all the recent troubles and you can still find a significant level of traffic at most times of the day.

Although having recently merged with the OnGame Network, Party Poker still uses its own bespoke software at the poker tables and, although the online poker site gets knocked for a lot of things, you cannot dispute the fairness of its random number generator when looking at the following results.

The Online Poker Watchdog analysed nearly 12,000 pre-flop all-in scenarios on $0.25/$0.50 full ring tables between January and May this year, and found the following results:-

The Online Poker Watchdog would have had no difficulty in collecting hand histories from PokerStars, world´s number one online poker site, when they conducted their testing in April. Looking at over a million hands played in $3.00 Sit ´n´ Go tournaments, they isolated almost 70,000 pre-flop all-in situations to review – the most comprehensive test of all!

Unsurprising to anybody familiar with PokerStars, the results concluded that there was no rigging of the software and found a smaller combined deviation in the number of hands one would expect to win against those that were won than any other online poker site.

Although the testing done was at specific stake levels in certain types of games, and focused on all-in pre-flop situations, it would appear that getting “sucked out” by dodgy software is more of a figment of the imagination. The Online Poker Watchdog intends to continue monitoring these sites, and those not tested to date, and we look forward to their future reports with interest.