Seven of the world’s top 10 online poker websites have shown a decrease in traffic during the past week. 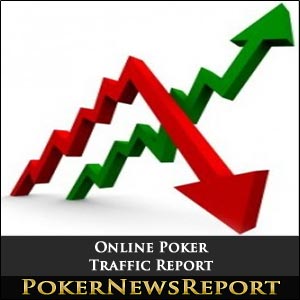 Seven of the world’s top 10 online poker websites have shown a decrease in traffic during the past week.

Additionally, there has been an overall worldwide downturn in visitors to [geolink href=”https://www.pokernewsreport.com/online-poker-rooms”]poker websites[/geolink] of 0.2% during the same seven-day period. Of course, that is a tiny decrease and will most certainly not be of major concern to the websites.

What will perturb websites is the year-on-year decrease in traffic, with a worrying slump of 29% recorded from this time in 2010.

Much of this drop can be credited to the uncertainty following the events of Black Friday in April, when the US Department of Justice (DoJ) closed down several big-name websites in the North American country.

The Cereus Network and Full Tilt Poker were hit hard by that DoJ decision and their absence from the market has definitely had a massive impact on the latest yearly figures.

But other sites not directly affected by that April bombshell have also seen their visitor figures collapse since last November and include the likes of the International Poker Network (IPN), which is down 34%, the Entraction Network (-43%) and EverestPoker.fr (-20%).

Many poker sites will be hoping that the slow increase in overall traffic recently will herald a poker boom next year, although, with the world economy in such a fragile state, it does seem rather hopeful.

However, the globe’s biggest real-money website PokerStars has, as usual, bucked the trend to show a gain of 2.5% in traffic during that week.

Many of PokerStars additional visitors will have been attracted to the site as they are in the middle of celebrating their 10th and have supplied some very attractive freerolls, as well as a $10 deposit bonus.

This week will also see a ring game leaderboard promotion start, which will undoubtedly see a further increase in traffic.

Also bucking the trend – if only modestly against yearly losses – were IPN with gains of 2.5%. With the site’s bad beat jackpot sitting at more than €550,000, it is likely that this upward trend will continue until the jackpot is won. Thereafter – who knows if that growth can be sustained?

Other notable gains over the past year were made by 888poker (up 78%) and Merge Gaming Network with sites like Carbon Poker, Lock Poker and PokerView (up 71%), while Action Poker Network showed a massively impressive boost of 195%, although they are a minor player in the market.

But there wasn’t such good news for PartyPoker, which has dropped down to third place in the rankings behind the iPoker Network following eight weeks at No.2 in the chart.

PartyPoker have witnessed a 4% decrease in visitors to their site – even with their World Domination promotion which sees players trying to collect 72 cities in a Monopoly-type game that earns competitors rewards – although they are still extremely close to iPoker in the chase to remain in the second spot to the all-conquering PokerStars.

However, PartyPoker will be concerned that their World Domination promotion has failed to capture the interest of many customers, especially as it does not come to a conclusion until the year ends.

Meanwhile, Bodog has once again shown massively significant traffic figures with the latest year-on-year result being a 61% leap that takes the site up one spot into 12th place in the rankings. It’s only two weeks back that Bodog Poker was down in 15th, so this site is most definitely one to watch.

With iPoker.it dropping three places to 15th, International.it and PeoplesNetwork.it also moved up one spot each to 13th and 14th respectively while losing two places to drop to 20th has seen Evert Poker (18th) and Svenska Spel (19th) overtake PartyPoker.fr (20th).