While most of the online poker industry has been watching New Jersey, Nevada’s online poker sites have seen player traffic jump recently. 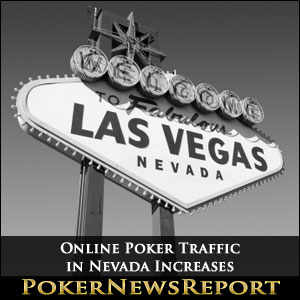 While most of the online poker industry has been watching New Jersey, Nevada’s online poker sites have seen player traffic jump recently.

WSOP.com and Ultimate Poker, who both also operate in New Jersey, saw an end of the year decline of over 20% in their Nevada offerings combined. But fortunes have changed along with the calendar in the new year. A 30-day high in player traffic was achieved recently, putting an end to a decrease that is often typical for Internet poker sites around the holidays.

The market share lead in Nevada is enjoyed by WSOP.com, who has managed to capture 55% of the ring game action. Although many industry observers expected the Silver State to have more than two sites operating by this time, UP remains the only competition and has grabbed the other 45%.

There is still no word when other online poker sites such as Treasure Island or South Point Poker will get the go ahead to launch in Nevada. Unfortunately, there is little room for many more sites before the market becomes diluted. WSOP.com records about 110 cash players online in a seven-day average, while UP’s latest numbers show 90 players in the same time frame.

While those numbers are encouraging, what’s really needed is interstate partnership agreements with Delaware and New Jersey in order to increase liquidity among all three states. Discussions of that nature have commenced previously, but have been only of an introductory nature.

Once such agreements are in force, it may prompt other states to move a bit more quickly in considering online poker legislation. It’s crucial that Nevada and the others that have set the tone for Internet poker in the U.S. continue to make strides that may be instrumental in legalization spreading throughout the U.S.

In the meantime, UP and WSOP.com will continue fighting for their share of the small Nevada market that is currently restricted by state boundaries. Many hope that those boundaries will be extended sometime in 2014 and some are predicting that to happen in the not-too-distant future.