American pro Justin Bonomo is moving to Malta so he can continue playing online poker following the US Department of Justice (DoJ) decision to shut down numerous poker websites in the States. 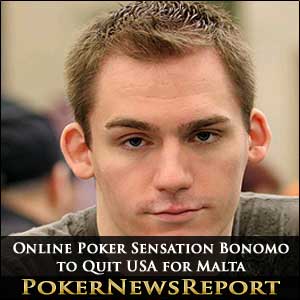 American pro Justin Bonomo is moving to Malta so he can continue playing online poker following the US Department of Justice (DoJ) decision to shut down numerous poker websites in the States.

Several poker rooms – including PokerStars, Full Tilt Poker and Absolute Poker – were hit by the DoJ’s ruling on April 15, or ‘Black Friday’ as many refer to that momentous day, resulting in countless online players struggling to maintain their careers in the USA.

With the likes of Olivier Busquet, Phil Galfond and four-time World Series of Poker (WSOP) bracelet winner Daniel Negreanu having already travelled north to Canada, 25-year-old Bonomo has announced through a post on his Facebook page that he will now base himself in the small European nation situated in the Mediterranean and close to Sicily and Tunisia. Maybe it is just too cold in Canada for the Las Vegas pro.

The online poker pro has seen his earnings cut dramatically by the April 15 injunctions – as have many other big-name Internet stars – so took to the social networking website to inform his friends that he believes “now is as good a time as any to announce that I’m moving to Malta”.

The former Team Bodog Pro – who has also been very successful in live tournaments to make close to $3 million in career earnings – also added that he will be placing his home on the market, saying that people should “keep an eye on my Facebook statuses if you have any interest in my apartment, furniture or car”.

There is also a good chance Bonomo will be joined at the Casino at Portomaso by the several other well-known pros who have already quit the USA, such as Mike ‘MeleaB’ Brooks – a Supernova Elite pro – as well as fellow American Jon ‘FatalError’ Aguiar, and New Yorkers Vanessa Selbst, the World Series of Poker (WSOP) 2008 $1,500 Pot-Limit Omaha winner, and Galfond – the 2008 Pot-Limit Omaha With Rebuys champion.

Will we see more American pros such as Bonomo – who is probably most famous for being caught entering major online poker events when using multiple accounts – quit the States for Europe or Canada? It does seem likely as there appears to be no immediate future for them in the USA.

Additionally, it is going to be of great interest how this exodus will affect tournaments in the North American nation. And will these players even return home if any resolution to the complicated situation arrives within the next few months?

Of course, we will keep you informed of any developments in relation to any legislation passed by the US government in the coming months.