Online Poker Regulation May Get Boost from Horse Racing Bill

Hope sprang anew for federal online poker legislation following a recent Congressional subcommittee hearing that centered around doping in horse racing. Texas Rep. Joe Barton, who has pushed for online poker regulation in the past, has taken up the cause again, much to the delight of poker players. 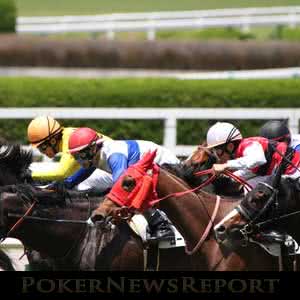 Hope sprang anew for federal online poker legislation following a recent Congressional subcommittee hearing that centered around doping in horse racing. Texas Rep. Joe Barton, who has pushed for online poker regulation in the past, has taken up the cause again, much to the delight of poker players.

But before we get all giddy with excitement over the possibility of poker regulation on the federal level, the issue hasn’t even reached the starting gate and it’s a long way from the finish line. Barton is looking at a potential opportunity to perhaps tie in online poker with sports betting and anti-doping legislation, according to Roll Call.

Hearing on Horses, Not Poker

During a Digital Commerce and Consumer Protection Subcommittee hearing last week, legislators discussed a measure pertaining to setting up a national authority that would regulate doping and the use of medications in horse racing. Online poker and sports betting were also discussed, which likely gave Barton the idea to bundle all of the issues together in one package.

Sports betting expansion has been a hot button topic as of late following the US Supreme Court ruling in May that deemed the Professional and Amateur Sports Protection Act (PASPA) to be unconstitutional. That decision paved the way for states to regulate sports betting at their behest, with two states already launching such offerings to their citizens and more expected to follow shortly.

The House Subcommittee on Crime, Terrorism, Homeland Security, and Investigations intended to hold a hearing on June 26 pertaining to sports betting. However, “Post-PASPA: An Examination of Sports Betting in America” was postponed without a new date set as of this writing. It’s likely that lawmakers will entertain that topic at some time in the near future.

Bill Sponsor Not Sold On Bundling

While including poker with anti-doping and sports betting would be a neat and tidy way to get such legislation passed – at least in the eyes of poker players – the sponsor of the horse racing bill, Kentucky Rep. Andy Barr, wants no part of any amendments to his proposal. Barr stated that there was no need to put those issues together if it would cause complications and controversy – which it likely would.

Barton, as most may remember, has long been an advocate for online poker. In 2011, he proposed the Internet Gambling Prohibition, Poker Consumer Protection, and Strengthening UIGEA Act (HR 2366). Two years later, Barton was pushing the Internet Poker Freedom Act (HR 2666). The same-titled bill was proposed in 2015 as HR 2888. Bill co-sponsorship was minimal for all of Barton’s online poker measures.

Utah Sen. Orrin Hatch stated last month that he would draft a new federal bill pertaining to sports betting. He has yet to make good on that promise.

Whether legislation on each separate issue can be packaged together as Barton has suggested remains to be seen.  With Barr not a fan of such a proposal, Hatch expected to introduce a standalone sports betting bill, and Barton failing to gather momentum for poker in the past, it would appear unlikely at this point.