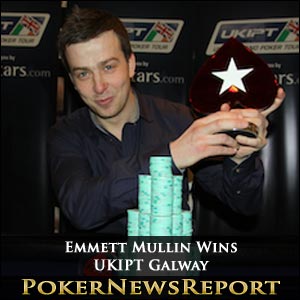 The 26-year-old from County Tyrone enjoyed a fabulous run after qualifying for the tournament through a €55 satellite at poker website PokerStars, before seeing off 687 other players to take the top prize of €100,000 when defeating fellow Irishman Ronan Gilligan in their heads-up battle.

The online poker specialist, who is known as ‘mully_85’ at PokerStars, was certainly thrilled by his success, saying: “It’s unbelievable and hasn’t sunk in yet. It’s by far my biggest cash and winning the event is huge for me.”

Mullin added that, although it had “been a bit of a drain”, he was still enjoying the “buzz” of victory – and emphasised that he and some friends would be enjoying “a few drinks tonight”.

Galway’s Gilligan left with €73,650 for his second-place finish, while Englishman Joe Roberts took home €51,900 for third, Irishman Craig Burke picked up €30,750 in fourth, and Lithuanian Aleksandras Rusinovas cashed for €24,150 in fifth.

The tournament’s last hand saw 33-year-old Gilligan, on the button, raise to 200,000 and Mullin make the call.

Mullin had flopped trip threes to be well ahead, leaving Gilligan requiring a seven to stay alive. The 10♦ then arrived on the turn to change nothing, as did the Q♣ on the river – and Mullin was the latest UKIPT champion.

Rematch Could Be On the Cards in Nottingham

These two opponents could well come up against each other again at the next UKIPT stop of the third season at Nottingham’s Dusk Till Dawn, when the five-day event runs from April 12 to 16.

Both have already qualified through PokerStars for the £770 buy-in main event, so maybe Gilligan will manage to exact some revenge for this Galway defeat.

Although the official final table was eight-handed, the last day began with nine players seated around the felt – until Ruijs exited in ninth place.

Having seen everyone fold before him, the Dutchman – who was on the button – moved all-in for his near-400,000 stack, to be called by big blind Mullin after then chip leader Gilligan, in the small blind, had folded.

The players enjoyed a short break then, before short stack Haile hit the rail in eighth place when losing out to Burke.

Abou Risk’s hopes of taking down a third UKIPT title after winning last year’s Galway event, as well as the Edinburgh leg from the same season two, ended when he was eliminated by Mullin in seventh place.

The Irishman snap-called with A♥ J♣, while Abou Risk showed K♠ J♥ to be way behind. The North American found the K♦ on the flop to gain a pair, but Mullin benefited, too, with the A♦ also arriving.

The other flop card was the 5♥, while the turn of 10♣ and 4♠ river did nothing to assist Abou Risk – and he was gone to leave us with six players.

John Willoughby Out in Sixth

Thereafter, Irishman Willoughby was the next to go in sixth place – only two hands after he had lost a huge pot to Gilligan.

In the cut-off seat, PokerStars qualifier Willoughby shoved all-in for his remaining 375,000 chips while holding A♠ Q♦, to be met by the A♦ 7♦ of button Rusinovas.

The 7♣ 4♣ 3♣ gave the Lithuanian PokerStars qualifier top pair, while the K♥ and 8♣ on the turn and river respectively meant only five players were still in the hunt for the top prize.

But Rusinovas was next to bust out in fifth place. Under the gun, he opened for 100,000, before Mullin – on the button – re-raised to 180,000. But then Rusinovas moved all-in for approximately 1.1 million, only for Mullin to call.

The Irishman revealed A♠ Q♦ to hold a lead over the A♣ 10♣ of the Lithuanian, while the flop of 2♦ 3♣ 4♥ provided some split pot possibilities. Incredibly, the 4♣ added even more possible chops – meaning any five, four, three of two would do – only for the A♥ to ensure that Mullin sent Rusinovas to the rail.

Mullin made the call to reveal A♠ 7♠, while Burke showed A♥ 3♦ ahead of a 2♥ 5♦ Q♠ flop that changed nothing. Mullin’s better ace held through the K♣ and 10♥ turn and river, so sending Burke out in fourth.

It didn’t take long for the main event to become two-handed when Roberts – yet another PokerStars qualifier – hit the rail in third place.

On the button, Mullin raised it to 150,000, while Roberts responded by going all-in for approximately 1.3 million. Mullin immediately called to show J♠ J♥ for a dominating lead over the K♠ J♣ held by Englishman Roberts.

Roberts needed a king, but the flop only showed 5♥ A♦ 8♥, while the turn was the 6♠ and the river the 10♥, so ensuring that the heads-up battle would be fought out between two Irishmen.

The next stop on the UKIPT pulls into Nottingham in April, so maybe it’s time to consider how you might qualify without stumping up the £770 main event buy-in.