Sheldon Adelson, the CEO of Las Vegas Sands and the world’s wealthiest casino executive, voiced his opposition to the legalization of online poker, believing that current technology is not adequate enough to prohibit minors from getting access to and wagering online. 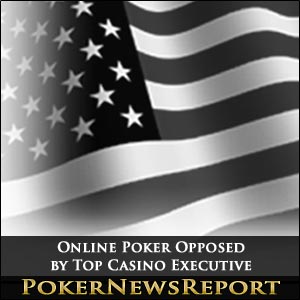 Sheldon Adelson, the CEO of Las Vegas Sands and the world’s wealthiest casino executive, voiced his opposition to the legalization of online poker, believing that current technology is not adequate enough to prohibit minors from getting access to and wagering online.

Adelson is the honcho of the gaming industry’s biggest publicly-traded company, which makes him an influental voice on the issue. But his beliefs against online poker regulation puts him in the minority of land-based Nevada casinos, who are pushing Congress to enact legislation to permit licensing and legalization of online poker.

As noted by Ron Reese, a Las Vegas Sands spokesman, Adelson has not made his stance known with the company’s board of directors, who also have yet to formally initiate a strategy on the online gambling issue.

It’s a personal observation of concerns about technology, Reese said, in regards to Adelson’s beliefs.

Adelson’s opposition comes at a time when other casino operators, including MGM Resorts International and Caesars Entertainment Corp., have partnered with established gaming companies overseas in anticipation of U.S. lawmakers eventually regulating [geolink href=”https://www.pokernewsreport.com/us-poker-sites”]online poker in America[/geolink]. Several weeks ago, MGM forged an agreement with another Nevado casino corporation, Boyd Gaming Corp., and Bwin.party, operators of Party Poker. Caesars has aligned itself with 888 Holdings, the U.K. gaming company that runs 888 Poker. Caesars currently operates online gambling sites in France, Italy and the United Kingdom through that partnership.

The casino industry has yet to completely agree on its position of regulated online poker and gambling, but the top lobbying groupy working on behalf of the industry, the American Gaming Association (AGA), has shifted from being neutral on the issue to actively supporting federal statutes that would permit the regulation and legalization of internet poker. Frank Fahrenkopf, the AGA’s president and CEO, said he spoke with Adelson recently and the Sands’ executive informed him of his opposition to legalization of U.S. online poker.

Sheldon has long had concerns about this issue, and it is perfectly within his right to make this decision, Fahrenkopf said. However, the AGA, at the direction of our board of directors, will continue to support federal legislation to allow states to license and regulate online poker.

The concern of underage boys and girls getting access to online poker and gaming sites has been debated in recent Congressional hearings aimed at solving problems of any intended legislation. In a hearing before the House Subcommittee on Commerce, Manufacturing, and Trade held in October that focused on consumer protection, Dan Romer, the Director of the Adolescent Communication Institute at the Annenberg Public Policy Center, expressed concerns about the institution of safeguards for minors who might attempt to gamble online.

Young people at a very early age are starting to gamble, Romer testified. It’s very important for the committee and the Congress to think about what the impact will be on families and young people when it comes to online gambling. If we have gambling that provides safeguards and protects underage gamblers, it would be excellent to include in any legislation.

The AGA is convinced that technology is advanced enough to accurately identify gamblers wishing to wager online to prevent minors and problem gamblers from being able to log on and access [geolink href=”https://www.pokernewsreport.com/online-poker-rooms”]poker sites[/geolink]. We are totally opposed to young people gambling, Fahrenkopf said. But he added that facial and/or voice recognition technology can confirm the identity of players.

Adelson is presently ranked 8th on the list of wealthiest Americans and is 16th wealthiest worldwide with a reported net worth of $21.5 billion. The casino mogul has supported the Republican party with sizable contributions for many years, including Arizona Senator Jon Kyl, a major supporter of 2006’s Unlawful Internet Gambling Enforcement Act (UIGEA), which was intended to prohibit online poker in the U.S. by preventing banks and financial institutions from processing payments for most forms of online wagering.

Las Vegas Sands operates casino-resorts in Pennsylvania, Macau and Singapore, in addition to the Las Vegas-based Palazzo and the Venetian Resort and Casino. The company has not partnered with any current online poker operators as other land-based casinos have done.