New Jersey Governor Chris Christie has stated his approval of online poker in the Garden State, but legislation will have to wait until the next session, as the current session ends on Monday. 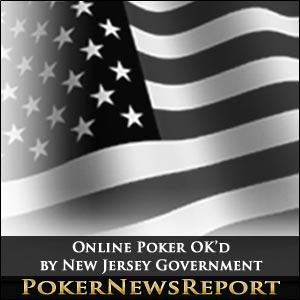 New Jersey Governor Chris Christie has stated his approval of online poker in the Garden State, but legislation will have to wait until the next session, as the current session ends on Monday.

“Folks should know I favor it [online gaming legislation], I want to do it,” Christie said. “I do not want to rush and get legislation that either doesn’t pass state constitutional muster, or creates other problems for us.”

Sen. Raymond Lesniak (D-Union) was hoping to push legislation through next week to keep pace with Nevada’s progress in intrastate online poker regulations, fearing to be “left behind the state of Nevada like we were with sports betting,” but has resigned himself to postponing his proposal until a later date in a new session.

“I’ve agreed to reintroduce Internet gaming in the next legislative session, and I expect that we can get it through the Legislature and signed by the Governor within the first few weeks of the new session,” Lesniak said in a statement.

The proposed bill had already been approved by the state Legislature in the beginning months of 2011, but Christie elected to use his veto authority to put the kibosh on its passage, citing concerns with the state’s constitution limiting all gaming to Atlantic City, as well as the vagueness of federal statutes. But modifications to the proposal that will require gambling website servers to emanate only from Atlantic City and the release of the U.S. Department of Justice memorandum clarifying the 1961 Wire Act as being applicable to only sports betting have apparently changed the Republican governor’s stance on the matter.

“I vetoed the last bill because I felt that it would open up the opportunity for there to be internet gambling houses all over the State of New Jersey,” Christie said. “I don’t think that’s what anybody wants. I think being able to have this be an Atlantic City-centric thing is something that makes sense to me. And given the Justice Department’s go ahead for people to be able to do it, I think we should go ahead and move on it. But, we have to do it in a responsible way.”

With Nevada having already accepted applications from online poker site operators and other states such as Iowa and California considering measures to approve intrastate internet poker regulations, New Jersey still figures to be a player in the race to be the first state to legally offer online poker to its residents despite the delay caused by having to wait until the next legislative session to get a bill passed.

“While I remain hopeful that New Jersey can take the lead on this exciting new direction for wagering – which would result in new revenues, new jobs, and new economic activity in the Garden State – I recognize that the complex issues surrounding internet wagering will take more time to iron out than we are afforded in the waning days of the current legislative session,” Lesniak admitted.