Online Poker not Welcome in Utah 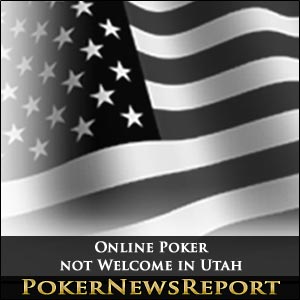 Utah Rep. Stephen Sandstrom (R-Orem) made an announcement on his website stating that he is drafting an anti-internet gambling law designed to prohibit online poker and gambling in the Beehive State.

“The [Utah] bill is even more significant due to the ruling by the U.S. Department of Justice (DoJ) that states may legalize online gambling,” Sandstrom said. “This bill is a referendum on the DoJ’s decision and some in the U.S. Congress such as Senate Leader Harry Reid to proliferate online gambling.”

Sandstrom’s reference to the DoJ is, of course, the recent ruling by the DoJ that clarified the 1961 Wire Act by opining that the antiquated law is applicable only to sports betting. The DoJ decision has many states clamoring for legislation condoning online poker and gaming. But Utah is not one of them.

“We want to keep Utah free from the negative impacts of legalized gambling,” Sandstrom said via his website. “Many gambling critics see the DoJ’s recent interpretation as another major crack in America’s moral foundation.”

Hawaii and Utah are the only states that ban all types of gambling. A majority of Utah residents belong to The Church of Jesus Christ of Latter-day Saints, or the Mormon Church. Statistics from 2007 show that 60.7% of the state’s population call themselves Mormons and the faith has always been against all forms of gambling, including lotteries sponsored by the government.

“The gambling industry profits from the vulnerabilities of its customers and opens the way for states to become further dependent upon tax revenues gained from a form of recreation that hits hardest those who can least afford it,” Sandstrom added.

While Utah is proposing legislation to prohibit its residents from playing at [geolink href=”https://www.pokernewsreport.com/online-poker-rooms”]online poker websites[/geolink] and various other internet wagering games, its neighboring state to the west has already accepted applications from gaming companies to provide online poker services intrastate. Nevada is aiming to be the first state to allow its residents to play online poker.

Most industry observers agree that any U.S. online poker legislation will most likely include laws that will allow individual states to “opt-out” of approving online gaming and poker. In that regard, Sandstrom’s pro-active stance on banning internet gambling for his Utah constituency may just be a waste of paper.

Unfortunately you can not leave comments on Stephen Sandstrom’s site, you can leave a comment with your thoughts here however.

One Reply to “Online Poker not Welcome in Utah”