The recently discussed adding online poker legislation as a rider to the tax relief measure was mucked when it was feared that such an amendment could jeopardize the entire payroll tax legislation. 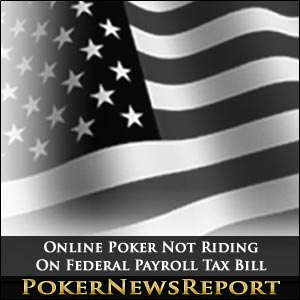 With federal lawmakers continuing to make progress on the passage of a payroll tax bill, the recently discussed option of adding online poker legislation as a rider to the tax relief measure was mucked when it was feared that such an amendment could jeopardize the entire payroll tax legislation.

Sen. Harry Reid (D-Nevada) had been rumored to be the primary supporter of the online poker regulations rider to the tax bill, which is designed to provide extensions of payroll tax relief and unemployment benefits to a still struggling U.S. economy. Many insiders believe that this was the last chance for online poker legislation to be enacted at the federal level prior to the November elections and possibly a new administration.

A Reid spokesperson confirmed to Politico that the internet poker legislation will definitely not be included as an amendment to the payroll tax bill. It now appears that online poker legislation on a state-by-state basis is holding a pair of Aces with December’s U.S. Department of Justice ruling that the 1961 Wire Act does not include online poker and with Nevada quickly paving the way with internet poker regulations to be the first state to offer online poker to residents within its borders.

The Nevada Gaming Control Board made additional progress to that effect recently by adopting Minimum Internal Control Standards to be followed by the casinos that will be offering online poker in the Silver State. Residents and tourists can play at the new online sites by registering their pertinent information that will be verified during a 30-day verification period. Players can only deposit up to $5,000 in that first month. Should the verification process fail, a player’s deposit will be returned, but any money won will be forfeited. Likewise, any money lost will not be recovered.

Regarding financial transactions, players will not be allowed to transfer funds to other players, as has been widely permitted by most online poker rooms to this point. However, players will be permitted to withdraw and deposit into their online account in person at the casino cashier cage. Nevada regulations, as of now, will allow only brick-and-mortar casinos to operate online poker sites.

Gaming lobbying organizations such as Poker Players Alliance and the American Gaming Association are strongly supporting federal legislation of internet poker and were hoping something could be done before New Jersey, Iowa and other states follow the lead of Nevada in implementing their own laws. A federal jobs bill is apparently next on President Obama’s agenda, but tacking on internet poker legislation to that measure has yet to be proposed, and if a federal online poker bill ever becomes a reality, it may have to be passed on its own.