Online Poker Not a Threat to State Lotteries

A study conducted by FairPlayUSA determined that federal regulation of online poker would not threaten the income generated by state lotteries. 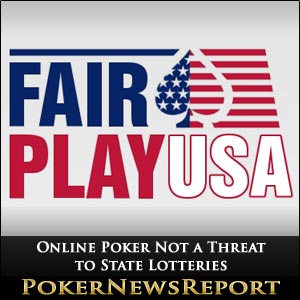 A study conducted by FairPlayUSA determined that federal regulation of online poker would not threaten the income generated by state lotteries because poker players and lottery players are not one and the same, they are different consumers using two different products.

The report, entitled “An Evaluation of the Effects of Online Poker on State Lotteries” was done by Christiansen Capital Advisors (CCA) on behalf of FairPlayUSA. The study analyzed economic and demographic data and also looked at a recently published report by the Public Gaming Research Institute (PGRI).

The study outlined the reasons why online poker would not affect individual state’s lottery sales, the main factor being that federal regulations would permit states to opt-out of allowing online poker in their state. Other determinants of the study include the fact that many different types of online gambling games are currently available to gamblers and if the lotteries would be adversely effected, the effects would have already been felt. Also, lotteries may actually benefit from federal guidelines that would abolish the [geolink href=”https://www.pokernewsreport.com/us-poker-sites”]existing poker sites currently catering to the U.S. market[/geolink]. Lastly, proposed federal laws would regulate internet poker and develop new tools and methods to actively enforce statutes against casino-type games and online sports wagering.

Eugene Christiansen, who helped found the CCA, the authors of the analysis, said that the compiled data showed that lottery games and poker games are as different as milk and wine.

“Wine and milk satisfy different consumer appetites,” Christiansen said. “Similarly, playing online poker and buying lottery tickets are fundamentally different forms of consumption. They really have nothing in common other than their legal status as gambling.”

The study was commissioned to respond to PGRI’s report, which opposes federal legislation of internet gambling and suggests that individual states should tax and regulate online gaming if legalization is realized, and for state lotteries to be able to offer the games as well. Lotteries are currently available in 43 states, in addition to the District of Columbia, the U.S. Virgin Islands and Puerto Rico. The PGRI study claims that all states combined stand to lose $1.4 billion in revenue if online poker is regulated on the federal level.

FairPlayUSA’s commissioned study calls the PGRI report “fundamentally flawed” and that the PGRI study “should not be used as the basis for any public policy decisions, particularly those related to the legalization of online poker.”

The CCA report, as a basis for proving that online poker and lottery games are fundamentally different, briefly touches down on the skill-chance debate. The two games are not alike because the lottery relies on pure luck and chance for a player to be successful, while poker “is a game of mixed chance and skill,” the study concluded.

“This study will be an important tool in FairPlayUSA’s ongoing efforts to educate and create public momentum for effective law enforcement, consumer protections and regulation surrounding the legalization of online poker,” said Tom Ridge, Pennsylvania’s former governor and currently an advisor at FairPlayUSA.