Probability plc, a mobile gaming company based in the United Kingdom with more than five years of experience in the mobile gaming industry, applied for a Nevada online poker license, although company executives felt their current chances of obtaining such a license are not highly probable. 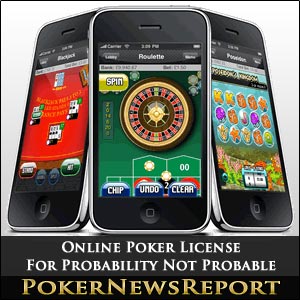 Probability plc, a mobile gaming company based in the United Kingdom with more than five years of experience in the mobile gaming industry, applied for a Nevada online poker license, although company executives felt their current chances of obtaining such a license are not highly probable.

In a release issued following submission of its application, Probability’s Chief Executive Officer Charles Cohen admitted that “the difficulty of getting a gaming license in places such as Nevada will also mean significant barriers to entry for smaller companies trying to break into the U.S. from abroad and restrict the market to large established companies such as Probability.”

Nevada gaming authorities have restricted poker licenses to existing brick-and-mortar casinos operating in the state, but companies focusing on gambling technology are also able to apply and partner with a casino. Probability has reportedly already begun partnership negotiations with U.S. companies.

Probability boasts about one million customers in the UK and features a wide selection of casino games such as bingo and slots that are accessible on more than 8,000 mobile phones from the oldest Nokias that were released in mid-1990 to the more modern iPad and iPhone devices.

Although Probability representatives were rather modest in their own assessment of the likelihood of obtaining Nevada licensing, the company’s knowledge and experience in mobile gaming would most certainly be attractive to a Nevada-based casino company. The popularity of mobile casino gambling has been rising quickly. The technology, though its been around for several years now, is considered to be still in its infancy. Many insiders believe mobile gambling will most certainly be the wave of the future. In that regard, Probability should have no trouble finding suitors for a partnership.

Nevada’s poker license application form is said to be voluminous in nature. Probability also mentioned the requirement that all board members of the company must provide fingerprints and ten years of personal and detailed financial information. A posting on the company’s website, which originally had been tweeted, said, “just left the lovely ladies at new Scotland yard with our fingerprints for Nevada licence application, now just 100 pages of forms to go.”

That brings to 13 the total number of applicants who would like to provide internet poker services to Nevada residents on an intrastate basis. The other twelve, in no particular order or license granting probability, include, Cantor Gaming, South Point Poker, IGT, 888 Holdings, Bally Technologies, Shuffle Master, Aristocrat Technologies, Monarch Casino, Caesars Entertainment, Boyd Gaming, Fertitta Interactive, and MGM Resorts.