Online Poker License Applications to be Accepted in Nevada

The Nevada Gaming Control Board has announced that in February it will start accepting license applications for companies to run online poker sites in the state. 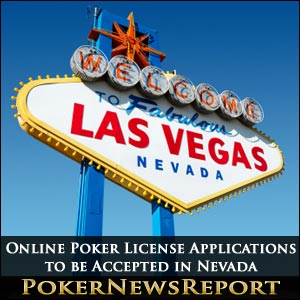 The Nevada Gaming Control Board has announced that in February it will start accepting license applications for companies to run online poker sites in the state.

Mark Lipparelli, Control Board chairman, told gaming industry professionals who were attending a conference on U.S. internet gaming laws at Aria Resort and Casino hotel last week that the board would be set to begin investigations of any and all applicants that month.

The process of obtaining a license is expected to proceed faster for companies who already hold gaming licenses in brick-and-mortar casinos in Nevada. Those who are approved and receive full licensing to offer internet poker play would be restricted to providing services to players within the boundaries of the state. Players in other states and overseas would not be able to access the Nevada poker sites, Lipparelli said. However, industry experts believe that intrastate online wagering will be just the first step in the regulating process and that interstate poker will eventually be allowed as well.

Companies with existing Nevada gaming licenses would have attachments to their current licenses detailing the new online services offered intrastate, while companies applying for new licensing would undergo rigorous licensing investigations, believed to take months to complete. Existing licensees will be required to show that their software can limit online players to Nevada residents as well as ensure that its players are not minors.

We’ve taken our brick-and-mortar operational standards to a new level, Lipparelli said. We’re going to continue to be flexible, but we think we’ve set the bar high for licensing and suitability.

Several laws were passed by Nevada’s legislature earlier in 2011 that prompted the Nevada Gaming Commission and Control Board to begin drafting online poker regulations over the summer. The new legislation is nearly ready for approval and is expected to be ratified sometime in December. Lipparelli said that since online gaming in the U.S. is new ground for lawmakers, it’s very possible that regulatory amendments or revisions may need to be considered following initial enactment of any new laws.

Approximately 75 legal experts and regulators from around the world attended the gaming conference. Although I. Nelson Rose, an expert on gaming and a law professor at Whittier Law School in Costa Mesa, Calif. was pessimistic about online poker regulations being passed anytime soon, other poker industry insiders saw things differently.

I think legalization is closer now than ever before, said Jon Porter, a former Nevada congressman who served in the House of Representatives for three terms and now advises the Poker Players Alliance (PPA).

Porter said that since tax revenue is needed so badly and the U.S. government faces automatic cuts of various worthwhile programs if some type of tax legislation isn’t approved soon that lawmakers will find a way to approve the obvious source of additional revenue that online poker would provide. But he stressed that gaming industry leaders need to voice their positions by lobbying and putting pressure on lawmakers.

It’s not going to happen if you’re waiting for Caesars or state lotteries or the Poker Players Alliance to carry the ball, said Porter, adding that the online gaming industry needs to consistently get its message across to lawmakers in order to move the legislation forward. Sometimes the industry is its own worst enemy.

Porter said that online gambling regulations may eventually be attached to another crucial bill towards the end of the legislative session, as was the case with the UIGEA’s passage in 2006. That bill rode the tails of the SAFE Port Act.

Porter also said that he gets the impression that one of online gambling’s leading opponents, Sen. Jon Kyl, R-Ariz., may be softening his stance on the issue. But other conference attendees said that Kyl would like to see tribal casinos in his home state of Arizona receive online poker licensing and economic benefits before he will support online poker legislation.