In a two-day gaming conference held in Las Vegas last week that saw many leading gambling attorneys, regulators and legal experts in attendance, a foremost attorney on gaming said that online poker legislation will not be put in place by lawmakers anytime soon. 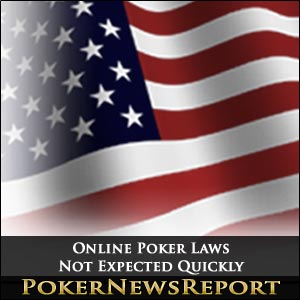 In a two-day gaming conference held in Las Vegas last week that saw many leading gambling attorneys, regulators and legal experts in attendance, a foremost attorney on gaming said that online poker legislation will not be put in place by lawmakers anytime soon.

I. Nelson Rose, a senior professor from the Whittier Law School in Costa Mesa, Calif., is pessimistic about progress on internet poker regulations being made quickly because federal lawmakers have shown that they cannot agree on any such significant legislation. Although the demand for speedy online poker laws is there because of the much-needed tax revenue that internet poker would generate, many hurdles are still in the way that will take time to work out, Rose said.

One of the obstacles lawmakers face is deciding if online poker should be regulated on the state or federal level. Rose said that most U.S. gaming companies would like to see federal legislation in order to maintain consistent regulations across all states. Several states, Nevada included, are in development of their own internet regulatory rules in order to avoid falling behind the plans of other states.

Rose said that there are six states leading the way in capitalizing on internet poker once laws are approved. Nevada is said to be very close to approving online gambling regulations, perhaps as early as next month. The other states that have an inside track to licensing are New Jersey, Florida, Massachusetts, Iowa and California. Iowa and New Jersey already have plans for regulations in place.

Although the “sin city” is home to the most land-based casinos, Rose sees a possible disadvantage for Nevada as being its small population if the federal government should enable each state to establish rules specifically for their own residents. But most of the states are assuming interstate poker play to eventuality be put in place.

Also discussed at the convention was what European poker room operators can expect when applying for licensing in the U.S. market. Many legal experts agree that foreign companies may be surprised at the amount of scrutiny they’ll get from U.S. gambling regulators.

Frank Schreck, a prominent Las Vegas gaming attorney with Brownstein, Hyatt, Farber and Schreck, said he began closely watching internet gambling when his clients asked his advice on collaborating with foreign poker site operators in gaming ventures. He advised many clients to not get involved with foreign gaming companies because the Unlawful Internet Gambling Enforcement Act (UIGEA) and the Department of Justice made it plainly clear that they would show no tolerance for [geolink href=”https://www.pokernewsreport.com/online-poker-rooms”]poker sites[/geolink] that enable U.S. players to place wagers over the internet with overseas companies.

I was one of the happiest guys on the face of the Earth when the indictments (against poker sites PokerStars, Full Tilt and Absolute Poker in April) came down, not because I wanted to see them in trouble, but because of the advice I gave, Schreck said.

Poker industry insiders believe that some regulators will disqualify gaming companies that continued allowing U.S. players to wager on their sites following the UIGEA’s passage in 2006. However, companies that enter into partnerships with established U.S. poker operators can possibly be allowed to get a piece of the U.S. market if the company they partner with has a solid record in the U.S.