While legalization of online poker in the U.S. has seen progress, lawmakers are still not in full agreement on which type of legislation will be in the best interests of everybody. 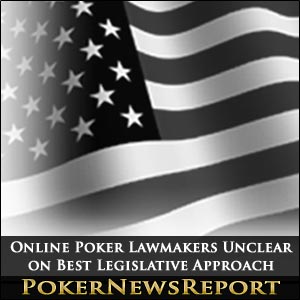 While the legalization of online poker in the U.S. has seen progress in recent months with Congressional hearings being held on the issue and individual states ramping up efforts on their own toward statewide regulations, lawmakers are still not in full agreement on which type of legislation will be in the best interests of everybody involved.

At a time when raising revenue through a regulated online poker industry is much needed for many states faced with budget deficits, as well as the U.S. government’s revenue shortcomings, internet poker legislation could provide some relief. But the proper approach remains elusive, as there are many groups who would like a piece of the pie, including Indian tribes, land-based casinos, the horse-racing industry and state lotteries.

It’s not a one-size-fits-all solution, said U.S. Digital Gaming Executive Vice President and General Counsel Melissa Riahei. A state like California [has] tribal casinos, card clubs, and a lottery. All of them have to be taken into consideration for a centralized solution. You also have to take into account the population to determine the model.

If poker legislation were to be enacted on a state-by-state format, the possibility remains that not enough players will be involved from individual states to make the system work and be profitable. The lack of liquidity in a verifiable customer base is a reasonable concern.

With regards to poker, liquidity is the key consideration, said Dan Walsh, Greenberg Traurig Director of Governmental Affairs. Even California, as big as it is, is one-tenth of the U.S. market. There’s no way without federal legislation that state licensing will be successful. Players will continue to go to unregulated sites.

If state regulations may not be successful due to liquidity issues, then some industry insiders believe the solution must be federal legislation. But there are many concerns in trying to get legislation passed through that avenue as well.

Congress is so boggled up, they can’t even pass gas, let alone a good bill, said Rep. Jeff Danielson (D-IA). What are the states supposed to do? We have an obligation as states to experiment. It’s better to be caught trying than to do nothing. Danielson feels that his responsibility as a lawmaker is better-served in concentrating on policy, and not on liquidity.

Individual states such as Iowa, California and Nevada have been forging ahead with their own plans for online poker legislation. Nevada has already accepted applications from five companies, including 888 Holdings and Bally Technologies, who are itching to be first in line to offer legalized online poker from American soil. But further complicating matters is the possibility that the U.S. Department of Justice (DoJ) will intervene and attempt to prohibit state-run models of [geolink href=”https://www.pokernewsreport.com/online-poker-rooms”]online poker sites[/geolink] by enforcing the Wire Act.

Online poker’s most vocal lobbying group, the Poker Players Alliance (PPA), has actively been supporting federal legislation that would bring internet poker to American homes and laptops. But the PPA has not completely ruled out state-by-state guidelines.

We’re not opposed to state bills, said PPA Executive Director John Pappas. We’ve really pulled off all of our lobbying efforts in the states, which have been efforts in Florida and California. And if Florida or California is able to move forward with a bill that makes sense for consumers, we’re not going to stand in the way. At some point, we might be on the bandwagon pushing for that legislation. I do see a time where failing a federal bill, we’re going to have to take the less desirable approach, but it’s still an approach. Perhaps the Feds will wake up once they see a number of states act. I still think there’s a lot of promise for federal legislation between now and next year in June or July. After that, it’ll be difficult to do any legislating. Up until then, we’ll be monitoring what’s going on at the state level and supportive where we see good bills.

Many are looking at the proposed bill of Rep. Joe Barton (R-TX), which favors the regulation of [geolink href=”https://www.pokernewsreport.com/us-poker-sites”]online poker in the U.S.[/geolink] giving authority to a series of agencies that are operated by the states, as the catalyst that will provide for online poker legislation. But Pappas prefers not to put all his eggs in one basket.

The Barton bill is the most prominent bill out there right now, but there has been a lot of discussion about the Senate and what they might do, Pappas said. While the Barton bill is obviously the most visible bill right now, it might not end up being the end product that everything is based off of. I think we should not just look at the Barton bill, but also any potential internet poker vehicle.

Perhaps clouding the picture even further is the announced retirement of arguably online poker’s biggest supporter, Rep. Barney Frank (D-MA). As the Ranking Member of the House Financial Services Committee, Frank’s efforts on behalf of online poker regulation have often been thwarted by the chairman of the committee, Rep. Spencer Bachus (R-AL), who ardently opposes online gaming.

Regarding the impending departure of Frank, Walsh said, He’s been a tremendous asset, but in his committee, there hasn’t been a lot he can do.

The jury is still out on the best possible legislative approach to online poker legislation. But Pappas is optimistic that the problems will eventually all be sorted out. I think the prospect of some legislation between now and June of next year is actually pretty good, he said. I would put it at better than a 50% chance that something could become law by then. There are some hurdles we’ll have to face, but we truly believe that if the powers that be in the Senate…. can agree on a proposal, then it being done won’t be a big problem.