Yesterday saw the launch of the first ‘regulated’ online poker site in Nevada – Ultimate Poker – but not everybody was happy. 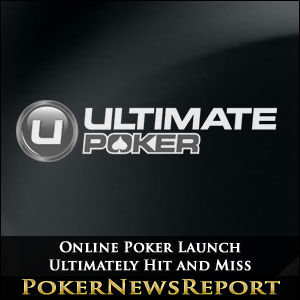 Yesterday saw the launch of the first ‘regulated’ online poker site in Nevada – Ultimate Poker – but once the initial euphoria died down, not everybody was happy.

Ultimate Poker got a mixed reception when it launched yesterday. The news that online poker players could once again enjoy their favourite pastime in a regulated environment was welcomed, as was the fact that players scoring big wins in one of the forthcoming tournaments could drive down to one of the 15 Stations Casinos in Las Vegas to instantly collect their winnings in cash.

Despite being only able to play while physically in Nevada, players signed up from all over the world to have their accounts ready for when they hit town for the World Series of Poker and the initial feedback from the team at Ultimate Poker was that they had received an amazing response to a deliberately low-key launch. However, as the site kicked into action, and the cash games tables started to fill up, holes were being picked in the registration process and in what Ultimate Poker actually had to offer.

Part of the process to ensure players are physically in Nevada when playing on Ultimate Poker is that their location is triangulated by their cell phone. One of the biggest cell phone service providers in Nevada – Verizon – did not want their customers ‘pinged’ by the Ultimate Poker servers, and players trying to verify their recently opened and funded accounts found that they could not verify their location and were barred from playing on the site unless they purchased a new phone with another provider.

No Mac, No Mobile and Conflicts with IE

Players hitting Las Vegas to compete in the World Series of Poker are also going to have to buy new cell phones in order to play on the Ultimate Poker web site, as the roaming function on their phones will not be recognised by the Nevada servers. Other technical issues also came to light during the launch – such as there being no mobile app ready or facility for Mac poker players, and download issues on computers using Internet Explorer as their default browser in conjunction with Norton anti-virus software.

Software No Big Hit Either

Once players overcame the hurdles to download the software and verify their accounts, further issues blunted their delight of being able to play online poker in Nevada once again. Slow software, maximum buy-ins of 50BB and the inability to resize tables were some of the faults found by players who were able to get onto the site to play real-money poker, while others complained about the lack of an HUD or Sharkscope facility and the fact that there was no rakeback (not allowed under Nevada State law) or a VIP program in place (in the pipeline according to Product Manager Chris Danek).

Promising Start, Could do Better

The timing of the launch of Ultimate Poker was intended to enable glitches and problems to be ironed out before the serious business of the WSOP got under way, and Ultimate Poker should be commended for taking the bold step to attempt the launch in the time that was available to them. However, significant improvements will have to be made to what the site has to offer if it is not to fall by the wayside when the bigger players enter the Nevada online poker market.

Footnote: Chris Danek and other members of the support team were on hand all day to answer player´s questions and help them through the registration process. The effort that the team put into making the launch as smooth as possible should not go unmentioned, and is an example to every other online poker site of how an informed and reliable customer service should be provided.