Caesars Interactive Entertainment will soon be permitting Nevada residents to take part in a beta testing program of its online poker offering. 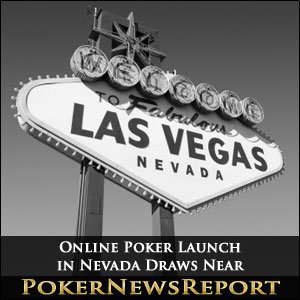 Caesars Interactive Entertainment will soon be permitting Nevada residents to take part in a beta testing program of its online poker offering.

Players are allowed to register over the Internet by providing their contact information. With the player application process underway, it is apparent that legalized [geolink href=”https://www.pokernewsreport.com/us-poker-sites”]online poker in the U.S.[/geolink] will soon be upon us. Although no timetable has been given on when the actual real-money Internet dealing may begin, registering players and launching a beta version is the logical first step.

The Silver State was first to enact online poker legislation when lawmakers approved intrastate Internet poker regulations in late 2011. Online play was originally anticipated to be up and running in late 2012. South Point Poker representatives made statements suggesting that they would be ready to launch last year. But unexpected delays in the software testing process caused the launch to be further postponed.

Realizing that an intrastate poker model would lack player liquidity to make the scheme viable in a small state such as Nevada, state legislators passed amended laws earlier this year allowing Nevada to partner with other states to increase the player pool. The new legislation also removed the previous requirement that called for federal approval in order to operate in an interstate fashion.

It looks as though Caesars may now win the race to be the first online poker site to go live in Nevada. The well-known casino and gaming company is expected to roll out its branded World Series of Poker (WSOP) offering shortly. Caesars received an interactive gaming license last year and has several partnership agreements in place in conjunction with its product.

One of those agreements is with European company 888 Holdings. Nevada gaming officials doled out a license to 888 last month, paving the way for the tandem to collaborate in a partnership that calls for Caesars to use 888’s computer software. With the incredible popularity of the WSOP, such a branded online site is expected to find favor with many Nevada and, eventually, U.S. players. Caesars hired the California-based Zambezi marketing agency to further promote its WSOP-branded website in Nevada, eGR reported.

After a long wait following the Black Friday indictments in April of 2011 that shook the online poker industry and revealed the problems inherent in playing in an unregulated market, the wait may soon be over. Nevada residents and tourists will be first to play legalized online poker in the U.S. With regulated states New Jersey and Delaware also coming aboard perhaps later this year and many other states expected to also pass legislation, someday legalized online poker will be spread out throughout the U.S.

One Reply to “Online Poker Launch in Nevada Draws Near”