Online Poker in US Possible in 12-14 Months

Caesars Entertainment Chairman Gary Loveman estimates that his company would need about “12 to 14 months” to get an online poker website in the U.S. up and running, based on the procedures involved in securing licensing. 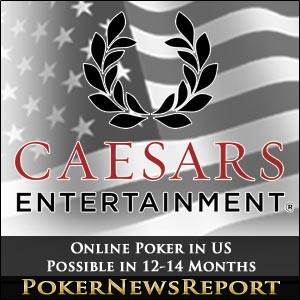 Caesars Entertainment Chairman Gary Loveman estimates that his company would need about “12 to 14 months” to get an online poker website in the U.S. up and running, based on the procedures involved in securing licensing.

The gaming company honcho recently discussed third-quarter earnings with analysts in a conference call, during which Loveman talked about the proposed internet poker legalization.

“Because of the relationships we have in place already, I don’t think we would have to sign any more deals that would dilute our earnings from internet poker,” Loveman said.

Those relationships are a partnership with 888 Holdings, the U.K.-based gaming company known for 888 Poker, that Caesars aligned itself with earlier this year. Caesars now operates online gaming sites in Italy, the United Kingdom and France through the partnership.

Caesars, who Lovernan claims was the first U.S casino to embrace online poker legalization, seems now to be running neck and neck with MGM Resorts International and Boyd Gaming, who recently partnered with Bwin.party, the parent company of Party Poker, in a race to be the first U.S. licensed online poker site. But the race, of course, is dependent first upon U.S. lawmakers enacting legislation that would allow the land-based casinos to enter the online poker market.

Loveman said that Caesars is ready for online poker and he urges Congress to pass the bill that would get the ball rolling. A recent estimate by analysts that the potential revenue from U.S. online poker would be in the ballpark of $5 billion per year was not an on-the-money total, according to Lovernan.

“I consider $5 billion to be a conservative figure,” he said.

“That’s about $10 million more than the payroll of the New York Yankees,” Loveman said. “And a much better bang for the buck.”

The Yankees, with baseball’s biggest payroll, won the American League Eastern division this year, but were eliminated in the first round of the playoffs by the Detroit Tigers.

Caesars Entertainment is a privately-owned company, but has publicly-owned debt. The gaming company operates many casinos in Las Vegas, including Harrah’s, Caesars Palace, Bally’s and the Rio.